Employee of the Quarter Goes to a Paw-Some Candidate 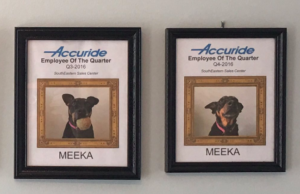 Michael Reeg works from home as a distribution sales manager for a hardware company, but he still makes sure he recognizes exemplary employee behavior. For the past year, Reeg has given his dog Meeka the title of “Employee of the Quarter,” complete with a framed photo of her on the wall. She’s not just coasting by on her good looks, though, Meeka truly helps out around the (home) office. There are times that I’ll even talk to her as I work through a problem or map out a customer solution,” Reeg says. “I try out my sales pitches and presentations on her.” Read more.

NBA player Gorgui Dieng is sharing his wealth with his home country of Senegal. Dieng, who plays for the Minnesota Timberwolves, started the Gorgui Dieng Foundation to help hospitals get the materials they needed to operate well, including 200 beds, exam tables, dialysis machines, X-ray machines and new monitors. The foundation also brings aid to children suffering from malnutrition; they have sent more than 1.5 million meals to Senegal. Dieng has even said he’s “more excited” about his work off the court than on, wanting people to know him as a person who cares before an athlete. Read more.

Dad Comes Through for Christmas

There’s no place like home for the holidays, but sometimes you have to get creative. When flight attendant Pierce Vaughan told her father that she would have to work over Christmas, her dad came up with a solution so she wouldn’t have to be without family — he decided to hop on the flights she was working over Christmas Eve and Christmas. When a passenger named Mike Levy sat next to Vaughan’s father and learned his story, Levy snapped a pic and posted it on Facebook, causing the father-daughter duo to go viral. Read more.

Santa Claus or Just the Best Bus Driver Ever? 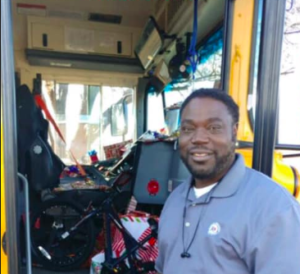 When Curtis Jenkins, a bus driver for Lake Highlands Elementary School in Dallas, Texas, asked the kids on his route what they wanted for Christmas, he wasn’t simply asking to be polite. Jenkins kept a list of the kids’ wishes and purchased a total of 70 gifts for the children to surprise them. On December 21, Jenkins greeted the kids with a present from their personal wish list. Jenkins simply wanted the kids to see some “positivity,” saying “If you show a lot of kids a lot of love they will do the same.” Read more.

Mars, one of the biggest confectionery companies in the world, is taking some concrete steps to ensure that all of its chocolate products are sustainably sourced. The massive candy company, behind sweets like M&M’s and Snickers, announced they are commiting $1 billion to make sure their cocoa comes from ethical origins. They plan to work with independent authorities who will check their sources, use GPS to track the product, and work with government and local authorities to combat child labor. Read more.