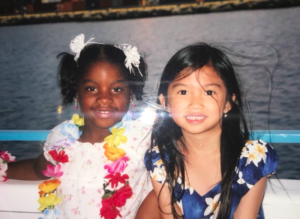 Nineteen-year-old Brianna Cry always wondered what happened to the friend she met a cruise back in 2006, so she posted a photo and sought Twitter’s help to find her. “Hey Twitter, I met this girl on a dinner cruise in Hawaii. We were basically best friends for that night so I need y’all to help me find her.” After receiving more than 111,000 retweets, the post made its way to Heidi Tran, the other girl in the picture. Twitter exploded with the news and the girls were equally as elated as they caught up on the past 13 years. “We messaged each other and caught up on life.” Read more.

Thirty-three years ago, Scott Macaulay was about to face eating alone one Thanksgiving. So, he placed an add in the local paper offering to host anyone who wanted to join. The tradition continued year after year, and this year, he hosted and cooked for 50 people – neighbors and strangers alike. “I think each of us are called to brighten a corner where we are.” He said. “Someday, maybe nobody will call me up and say they’re coming for Thanksgiving dinner, and I’ll be really happy that everybody’s got a place to go.” Read more.

After losing his wallet on a plane, 20-year-old Hunter Shamatt didn’t think he would see it again, along with the ID, paycheck, and $60 in cash that it contained. To his surprise, he received a package in the mail containing his wallet with all contents in tact… and an extra $40. The sender, who identified himself as only T.B. said “I rounded your cash up to an even $100 so you could celebrate getting your wallet back. Have fun!!!” After posting the letter to social media, Hunter found the man who sent him his wallet and was able to thank him. Read more. 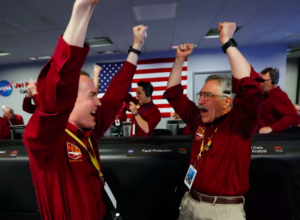 Scientific discovery… now that’s a reason to jump for joy! NASA shared a peek into the control room with scientists enthusiastically celebrating the moment they landed a robot on Mars. After an 11-month journey, the scientists sat in anticipation for six-and-a half minutes while they awaited confirmation that the robot had successfully landed on the planet. When the signal came through, everyone in the room jumped up with excitement and starting cheering. The robot, InSight, will spend one Martian year taking pictures and collecting samples from the planet. Read more.

More than 600 Christmas trees are on their way to service members around the world thanks to fifth-graders in New Hampshire. Bethlehem Elementary School is joining forces with the Trees for Troops organization, which works to spread a little Christmas cheer to men and women in uniform, along with their families. When he was a kid, marine Sam Petree was part of the first group students who got involved in the project. While in the military, he had a tree delivered to him from the same organization. “I know how it feels to be away from your family and loved ones during the holidays,” he said. “These kids are supporting the troops and it teaches them good work ethics.” Read more.