Let Me Tell You About My Best Friend! 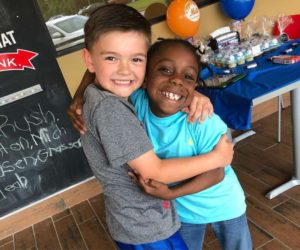 One 7-year-old boy is finding the strength to walk again thanks to his best friend. Rush Monday was in a serious car accident with his family that left him in too much pain to walk. When he was told that his best friend, Quinton Neal, was coming to visit, Rush said he would try and walk when Quinton was there. Sure enough, with Quinton by his side, Rush began walking down the hallway. The boys, who dress alike and often call themselves twins, do everything together. When asked about their friendship, Rush’s mom said, “They don’t see in size difference, they don’t see in color differences. We want Rush and Quinton just to show the world, ‘Hey, it doesn’t have to stop when you’re 7 and 8. It can be like this all the time.’” Read more.

Celebrities Are Joining Forces to Help Amidst California Wildfires

California has been getting hit hard by wildfires and many people are stepping in to help in any way they can. Firefighters have been working around the clock to try and contain the blazes and chefs are showing up to make sure they are fed. A handful of celebrity chefs are volunteering their time and culinary skills. José Andrés and his charity World Central Kitchen are working with volunteers to make and deliver food to the firefighters, along with others like Food Network stars Tyler Florence and Guy Fieri. It’s not just the foodies who have been getting involved. Lady Gaga, who was also evacuated from her California home, was seen donating food, gift cards, and words of encouragement at several shelters.Read more here and here.

Friendship Is Served (Along with Breakfast) at Local McDonald’s

The internet is feeling the love after a photo of two strangers eating breakfast together went viral. Twenty-eight-year-old Eric Haralson was eating breakfast alone at his local McDonalds when an elderly women came over and asked if she could join. Haralson said of course and the next thing he knew, they talked for 45 minutes, swapping stories, advice, and finally, phone numbers! Another customer captured the sweet photo and posted it to Facebook, where it went viral. When asked what they talked about, Haralson said, “She mentioned many times how we all should love one another and how we should not judge anyone because you never know how their day is going and what they’ve been through.” Read more. 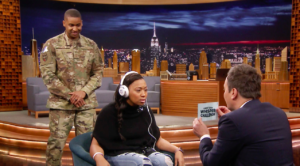 Jimmy Fallon knows how to surprise his audience, and he didn’t let them down this past Veterans Day. He invited a woman in the audience to join him to play the Whisper Challenge. After a few back-and-forths, Jimmy had a phrase for the woman, India, to try. While she had the headphones on, he repeated, “Your husband is behind you.” When India didn’t guess the phrase, Jimmy showed her the card. She turned around to see her husband, also a soldier in the military, home from deployment and standing right behind her. And the surprises didn’t end there. Jimmy also announced that T-Mobile would donate money to help redesign the family room at Maryland’s Walter Reed National Military Medical Center, a cause India’s tirelessly worked toward. Read more.

If you live in an area that gets snow, you can probably remember the excitement you felt as a child during the first snow of the season. Two Eritrean refugee children just experienced snow for the first time ever, and they couldn’t contain their joy. Through the Ripple Refugee Project, Canadian citizen Rebecca Davies is sponsoring a mother and her two children who came to the country as refugees. In their first 48 hours in Canada, it began to flurry and the children ran outside to celebrate, which Davies captured on video. After posting to social media, Canadian Prime Minister Justin Trudeau tweeted “Amazing — now convince them that shoveling is fun and you’re all set. Thank you for everything you do, Rebecca.” Read more.