US Embassy Squashed Our Dreams of a Cat Pajama Jam Party 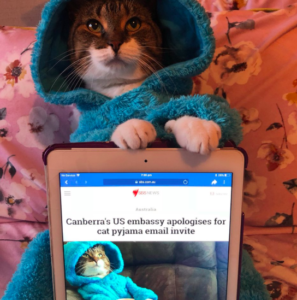 We’ve all received mass emails that make us roll our eyes and immediately hit delete, but in Australia, one such email solicited a much different reaction. The U.S. Embassy in Australia accidentally sent out an invitation for a cat pajama-jam party. They were testing a new email broadcasting platform when the email was sent to a number of people. When the embassy issued an apology, it wasn’t met with annoyance, but rather with disappointment that, in fact, there was no cat pajama party occurring. Twitter had a laugh, and the U.S. Ambassador in New Zealand said that they may have to host the party if Australia doesn’t. Read more.

Stephen King is making young filmmakers’ dreams come true by selling film rights for just $1. A group of students from Blaenau Gwent Film Academy in Wales will be making a film adaption of “Stationary Bike” after purchasing the rights from King at the bargain price. Back in 1977, King created the Dollar Babies program, which sells his unadapted stories to students for heavily discounted prices. The director of “Shawshank Redemption,” Frank Darabont, even participated in the program in 1986. King’s only caveat? He wants a copy of the film when it is complete. I’m sure the students won’t have a problem with that. Read more.

Too frequently, important, necessary jobs, such as those relating to sanitation, often come with a stigma. But the students at Moody Elementary in Alabama recognized the value of clean floors and empty trash cans and decided to do something special for their school custodian. Eugene Hinton was asked to come to the gymnasium to clean something up, but instead of finding a mess, he was met with a room full of signs and cheering children. The touching moment brought tears to Hinton’s eyes, as the kids proceeded to give him high fives and handmade gifts. Thank you for your hard work, Eugene! Read more.

Train Conductor Comes to The Rescue of a Pup 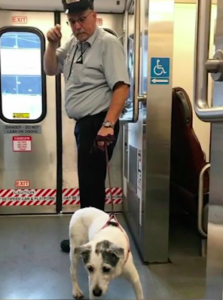 Some people will do anything to rescue an animal from danger and Howard Kempton did just that. Kempton, a New Jersey Transit train conductor, stopped the train, got off, and ran after a dog he saw who was roaming on the tracks. Once he caught the dog, he used his tie as a makeshift leash to make sure the pup wouldn’t escape again. Soon afterward, the dog was reunited with his owner, who was extremely grateful Kempton went the extra mile to help out. Read more.

What do you do when you cancel your wedding? One women in Texas turned the cancelation of her nuptials around and decided to donate her wedding venue. Kolbie Sanders wrote a post on Facebook explaining that she had broken off her engagement but couldn’t get her money refunded. She asked if anyone knew someone who needed a wedding venue and was offering hers. After reading through more than 700 comments, Sanders choose Halie Hipsher and her now husband Matt Jones at random. Hipsher shared that her grandfather was fighting stage 4 pancreatic cancer, and they weren’t sure if he would be able to attend their wedding in a year. But thanks to Sanders, the entire family was able to celebrate the couple’s happy moment. Read more.