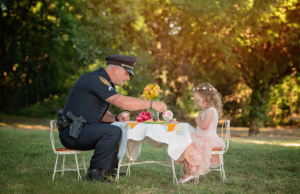 One young girl found a unique way to honor the policeman who saved her life. Bexley and her mother, Tammy Norvell, invited the police officer for a tea party in their backyard, where they shared oreos and drinks. Reflecting on the day that Corporal Patrick Ray saved Bexley from choking, Norvell says that “It has made me want to change people’s images and thoughts about these men and women that serve us everyday.” Read more.

They come from war-torn Syria, South Sudan, Democratic Republic of the Congo, and Ethiopia, and have all beaten tremendous odds to make it to the Olympic Games in Rio. For the first time in Olympic history, a team of 10 men and women will compete in running, swimming and judo, and bring global attention to the scope of the worldwide refugee crisis. International Olympic Committee President Thomas Bach said, “These refugee athletes will show the world that, despite the unimaginable tragedies they have faced, anyone can contribute to society through their talent, skills and strength of the human spirit.” Read More.

When Arkansas native Jessica McClard had an idea for a 24-hour-food pantry, she built one right in her Church’s parking lot. Starting a movement called “Little Free Pantries,” McClard let her community know about it on Facebook. The idea is simple: out of the generosity of their hearts, neighborhood members come together to stock the cabinet with bread, peanut butter, and other pantry items to give those living in food insecure households the opportunity to quickly and anonymously pick up food. McClard says she intends to keep the project entirely open-source to maintain its feeling that anyone in any town can do it. Read more.

The remains of an American soldier who gave his life in World War II more than 70 years ago were transported on a Delta flight earlier this week. The pilot informed the passengers, and a young people’s choir that just so happened to be on the flight from Frankfurt, Germany to Atlanta, Georgia spontaneously stood and sang “Battle Hymn of the Republic” in honor of the fallen veteran. Fellow passenger Diane Cupp took a video of the song on her phone and then posted it to Facebook, where it went viral.  The choir director can be seen leading the choir of students in perfect harmony. We’re not crying, you’re crying! Read more.

Leah Katz-Hernandez is the first deaf person to hold the title of ROTUS, or Receptionist of the United States. The 28-year-old Connecticut native first began her career at the White House as an intern under President Obama. She’s the first person to greet visitors as they come through the West Wing. “The White House is really a model for accessibility for people with disabilities – and especially for deaf people,” Katz-Hernandez says. “I believe my story sends a good message about the abilities of people who are deaf and Latino to be successful anywhere.” Read more.