Why This Refugee’s Restaurant is the ‘Nicest in America’ 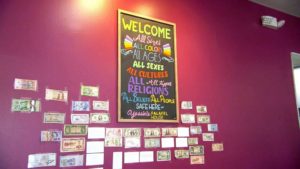 A falafel restaurant in Knoxville, Tennessee, has been named the Nicest Place in America. The restaurant was opened by Yassin Terou, a Syrian refugee who fled war seven years ago. He wants to bring love and happiness to his town, and he’s succeeding. With a sign on his door saying that every type of person is welcome to his lovingly-prepared food, the “nicest place” honor is not a surprise. “Yassin’s Falafel House is about family, about love, about building community,” Terou said. “So we make sure when you get your food, you smile and feel love with it.” Read more.

A Sweet Reward for Recovering a Stolen Van

The Most Experienced Barber in Town

Anthony Mancinelli has been cutting hair for 96 years, and the 107-year-old isn’t slowing down. In 2007, at the age of 96, he was recognized by Guinness World Records as the oldest working barber. He cuts hair five days a week from noon to 8 p.m. “He never calls in sick,” says Jane Dinezza, owner of the hair salon where Mancinelli works. “I have young people with knee and back problems, but he just keeps going.” When asked about how he stays so energetic and fit, Mancinelli says he doesn’t do anything special, but did comment: “I eat thin spaghetti, so I don’t get fat.” Read more.

A new approach to counseling and therapy in Zimbabwe has been having positive effects on people who suffer from mental illness, and the rest of the world is noticing. Dixon Chibanda, a psychiatrist in Zimbabwe and director of the African Mental Health Research Initiative, started a program called The Friendship Bench where grandmothers are trained to talk to people who need mental health services. Chibanda came up with the idea when he was faced with no funding and no professional psychologists to help the growing number of people living with mental illness. Chibanda’s team trained the grandmothers to use scientific techniques and their knowledge of cultural norms to practice a unique type of therapy. When Chibanda’s team conducted a study, they found that after six months, the group who had seen the grandmothers had significantly lower symptoms of depression compared to the group who underwent conventional treatment. Read more.

With the rising cost of colleges in the U.S., more young adults are graduating with student loan debt or even having to postpone college because they don’t have the funds. This week, “Good Morning America” surprised three students by giving them each $40,000 scholarships. The anxiety over being able to afford college can be great, but with the help of the College Board Opportunity Scholarships, who teamed up with GMA, these young scholars have the chance to pursue their dreams. Read more.