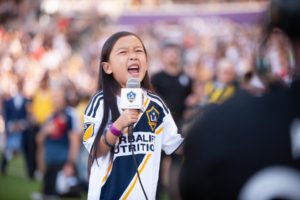 It looks like we’ve found the next Christina Aguilera. Seven-year-old Malea Emma Tjandrawidjaja stole the show belting the national anthem before an LA Galaxy soccer match. Announced as “tiny but mighty,” she definitely lived up to the introduction, performing a powerful rendition of The Star-Spangled Banner that quickly went viral. Malea Emma, whose acting experience includes playing young orphan Molly in the Hollywood Bowl production of “Annie”, hopes the attention her voice has gotten her will help her “only wish” come true. The wish: To sing with Christina herself, of course! We’re rooting for you, Malea Emma. Read more.

Mom Gets Creative for Family Pictures

After years of trying to connect with her autistic son, Samantha Bishop has found a new way to do so. Samantha, a photographer, always had a difficult time taking pictures of Levi. He’s uncomfortable with eye contact and showing emotion on command. But Samantha noticed that Levi loved dressing up. So, instead of forcing emotions for the camera, she allows Levi to dress up in whatever costumes he wants for a photo shoot. “This is him in his element, Samantha said. “There are no forced smiles, no bribery, no pretend happiness. This is the goofy, hilarious, kind hearted boy I was given. … I choose to celebrate his ‘labels’ and teach him to use them to his advantage rather than see them as an obstacle.” Read more.

This Radiation Therapist Wants to See You Be Brave

A radiation therapist is doing everything she can to help kids feel brave when they most need it. When receiving radiation, young cancer patients wear a white, mesh mask over their face to prevent movement and protect them from the radiation. This can be very scary for children receiving the treatment, so Jennifer Cook, a radiation therapist at Greenville Health System’s Cancer Institute, has decided to add a fun twist. She decorates the mesh masks in children’s characters: Mickey Mouse, comic book superheroes, and Disney princesses. “The kids really like them,” said Dr. Michael Greenbaum a radiation oncologist at the institute. Jennifer’s masks help make a scary experience a little less terrible. Read more.

4-Year-Old Granted His Own Parking Space 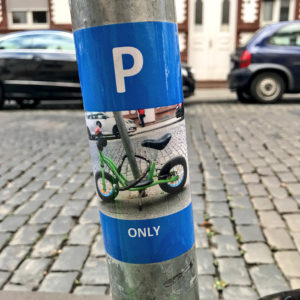 Christie Dietz’s 4-year-old son has made a habit of parking his neon green bicycle at a particular lamp post virtually every day for the past year. It turns out other people have taken notice, prompting a stranger to make a special sign just for him. The kind hearted person posted a parking sign on the lamp post with a picture of the bike. He was jazzed, as his mom tweeted, “My son has parked his bike by this lamppost just about every day for the last year. This morning, this sticker had appeared. Absolutely made our day. People can be so brilliant. Thank you, whoever did it.” Read more.

Florence Wisniewski is working hard to remove the negative connotation from the name “Florence.” The 4-year-old from Chicago is using her name, which she shared with the recent Hurricane Florence, to help the victims of the storm. When Florence found out about the hurricane, she wanted to help. So her dad created a poster with images of her face along the hurricane path and coupled it with a box for donations at her school. But a photo of the poster went viral, and donations from all over began coming in. Florence has collected thousands of dollars worth of items to help the victims in the Dakotas. Read more.