Put a Ring on It — At the Emmys 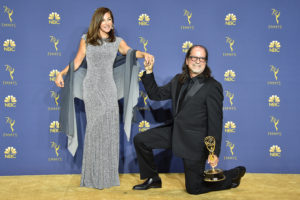 The Emmy Awards this week proved there’s truly a first time for everything. Viewers who tuned into the show were in for a delightful surprise as the director Glenn Weiss, took the stage to accept his award for Outstanding Directing for a Variety Special. While thanking his girlfriend, Jan Svendsen, he proudly proclaimed, “Jan, you are the sunshine in my life. And Mom was right, don’t ever let go of your sunshine. You wonder why I don’t like to call you my girlfriend? Because I want to call you my wife.” Svendsen happily accepted the proposal, and we can definitely say it was the most memorable moment of the night. Read more.

Nearly half a century after making an astonishing and history-making discovery, Jocelyn Ball Burnell is finally being properly acknowledged. When Burnell was a grad student at Cambridge University, she made a remarkable find: four gently pulsing sources of radio waves called pulsars. Despite months of research, her advisor and another man were awarded the Nobel Prize for the discovery. Instead of being angry, Burnell was proud that the Nobel committee was recognizing astronomy. Now, nearly 50 years later, Burnell has been awarded the Breakthrough Prize in Fundamental Physics, which includes a $3 million prize. She is planning to use the money to start a scholarship for women, minority, and refugee grad students. Read more.

Fifty-one-year-old Tony Alsup has been making use of his own “Noah’s Ark” for years now. Alsup bought a school bus that he’s been using when hurricanes strike to help rescue forgotten animals from disaster areas. During Hurricane Florence, he rescued 64 animals from four different shelters. If it wasn’t obvious, Alsup is an animal lover, saying, “I’m like, look, these are lives too. Animals — especially shelter pets — they always have to take the back seat of the bus. But I’ll give them their own bus. If I have to I’ll pay for all the fuel, or even a boat, to get these dogs out of there.” Read more. 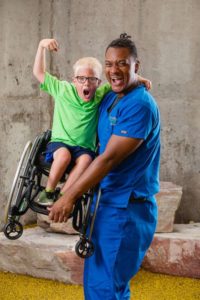 The Mary Free Bed Rehabilitation Hospital in Grand Rapids, Michigan, is commanding attention for National Rehabilitation week with a incredibly fun video. Former patients and Mary Free Bed staffers teamed up for a “Miracles in Motion” video choreographed with Marisa Hamamoto, founder of Infinite Flow, an inclusive dance company. Dr. Sam Ho, medical director of the Spinal Cord Injury Program at Mary Free Bed, who also participated in the video, offered an inspirational message to go along with it: “You work hard enough, you will get to where you want to get to. So every day we are interacting with patients, hopefully people will be inspired to try harder because every day is meaningful.” Read more.

As Mr. Rogers said, in times of tragedy “look for the helpers.” And as Category 4 Hurricane Florence hit the Carolinas last week, helpers fortunately came out in droves. Basketball legend Michael Jordan, who grew up and attended college in North Carolina and now owns the Charlotte Hornets, donated $2 million to relief and recovery aid. Churches and mosques throughout the two states, such as Manna Church in Fayetteville, N.C., opened their doors to offer shelter from the storm, providing food and help for first responders. On a more local scale, one Walmart employee made a huge difference in Garner, N.C. When a woman came in to buy relief supplies for victims of the hurricane, manager Jeff Jobes insisted that all the purchases were on him, providing 254 clothing items to those in need. Read more here, here, and here.