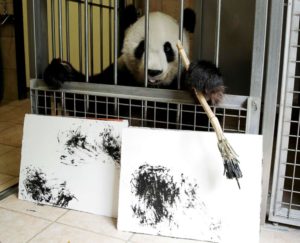 Move aside, Jackson Pollock, this painting Panda is the new GOAT of abstract art. Yang Yang is an 18-year-old Panda who lives at Schoenbrunn Zoo in Vienna, Austria. She has become quite the artist, using black paint on a white canvas (with a zookeeper as her easel!) to paint abstract artwork. You might need to save up before placing an order, though — her paintings sell for about $560 per item. The funds from the sales will go towards making a picture book of the zoo’s pandas. If that’s not impressive enough, she’s also a working mom, haven given birth to five baby pandas over the years. Read more.

A new social media challenge has gone viral and it’s bringing about some positive change (literally and figuratively). The #TipTheBillChallenge encourages restaurant patrons to leave 100 percent gratuity on their check when dining out. It’s brought to attention the low wages in the restaurant industry, but also made the day of many people in the service industry who have benefitted from the cash. One server on twitter noted, “As a server your only source of income are tips. If someone tips 50% or more that goes a long way. Mentally and financially.” Read more.

Ocean Garbage Is the New Fashion Trend This Fall

The Miami Hurricanes will certainly be less destructive to the environment than their namesake. This upcoming season, the University of Miami football team will be the first college to take the field with uniforms, cleats, and gloves made from ocean waste. The jerseys are made from repurposed fishing nets and other nylon waste, and the cleats and gloves are made from other garbage collected. Although the traditional orange color will remain a staple of the ensemble, the team uniforms will also feature accents that will serve “an ode to the cause to end plastic pollution of the oceans.” Read more. 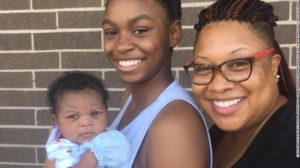 Chicago teacher LaShonda Carter has always told her students to reach out if they needed her, and when a former student reached out, she backed up her promise. Larresha Plummer, an 18-year-old whom Carter taught three years ago, mentioned that she wanted to go to a job fair, but had no way of getting there. With a 3-week-old baby who Plummer couldn’t take on the bus for health reasons, it seemed like an impossible task. So, Carter immediately offered to not only drive her to the fair, but also babysit while she attended. According to Carter, Plummer now has a job and will be attending college in the fall. Read more.

People to People, a nonprofit with programs dedicated to serving the underprivileged, has a new initiative to help kids start the school year off right. The Back to School with Dignity program provides backpacks to almost 2,000 children from low-income families before the start of the school year. Big companies like Pfizer and Morgan Stanley have supported the program, which fills the bags with grade-appropriate supplies for kids, like calculators, binders, and folders, to start the school year off with everything they need. Read more.