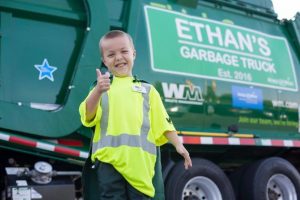 The Make-A-Wish Foundation does a lot of good providing terminally ill pediatric patients with experiences of a lifetime. 6-year-old Ethan Dean, a cystic fibrosis patient, knew exactly what he wanted for his wish: to live his dream of being a garbage man. Dean got to wear the uniform, ride in the truck, and pick up trash around his hometown of Sacramento, California. Afterwards, a press conference was held in his honor. Dean exclaimed that he had the “best day ever,” spending it with his heroes. Read more.

Despite being surrounded by violence and terror, some Syrians living in the Damascus suburb of Darayya have channeled their efforts into creating an underground library. While many of the books are used by aspiring doctors and teachers, some individuals use the library’s resources simply for the joy of reading or as a distraction from their present reality. “Books motivate us to keep going” says Omar, one man who uses the library, “We want to be a free nation. And hopefully, by reading, we can achieve this.” Read more.

The ever-popular mobile app Pokemon Go turned one player into a first responder when a fire broke out in a nail salon near his home. He was out hunting Pokemon when he smelled smoke and discovered the burning building. The fire department says the building could have been seriously damaged if he hadn’t found the fire in time. Turns out Ash Ketchum isn’t the only hero in this world! Read more.

Sgt. Steve Wick, who is part of both the Houston police department and an outreach team that assists homeless people, was recently documented washing the feet of a local homeless man named Quintus. Due to glaucoma, Quintus is 95% blind and sells newspapers to get by. In addition to washing his feet and clipping his toenails, Wick and fellow officers got Quintus a shower back at the station and brought him to a shelter, where he is being set up with an eye doctor. Read more.

ALS Challenge: From Social Media to a Scientific Breakthrough

Talk about a flash-back Friday! The popular social media trend from the summer of 2014, The ALS Ice Bucket Challenge, has produced real results. Although skeptics questioned how dumping ice on your head on your head could create change, two years later it actually has. One of the research projects that the challenge helped fund has found a new ALS gene that can help scientists on their road to finding a cure. Turns out a little ice in a bucket can go a long way! Read more.