Mexican Nuns Use Convent as Refuge for Endangered Salamanders 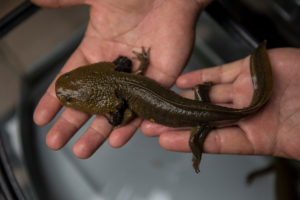 In Mexico, there’s a convent that houses a colorful secret: The Basílica de Nuestra Señora de la Salud, home to two dozen nuns of the Dominican order, is also home to a thriving colony of 300 salamanders called achoques, an endangered species. Achoques are only found in Lake Pátzcuaro in Mexico, and their numbers are falling fast. The convent is critical to saving the species in the wild: The nuns suspected the species was in trouble when they began to notice fewer and fewer of them in the lake. Now, they’ve put the salamanders to work by using a substance secreted from their skin to make cough syrup. At first, the convent helped the achoques primarily to save their business, but they quickly realized how important their work is to conserve the species. Now, the nuns and the achoques have a symbiotic relationship. Best roommates ever? Read more.

Dr. Melissa Freeman has been practicing medicine since 1961, and she doesn’t have any plans to slow down. The 92-year-old Bronx-born super doctor has 60 years of experience under her belt and continues to dedicate her time to health endeavors around the city. She splits her time between her own 40-year-old private practice and a clinic geared toward helping those addicted to opioid drugs. “You do what you have to do.” Freeman said. “As long as God gives you life and gives me strength, I’ll have to keep doing it, and he has been very, very merciful for me.” Read more.

Utah Jazz guard Donovan Mitchell continues to display his good character on and off the court. In his latest act of kindness, he overhead a boy at the Apple Store tell a consultant he couldn’t pay for the repairs on his phone and immediately jumped in to pay it for him. The 21-year-old player is a star in the Salt Lake City community not only for his amazing skills on the court, but also for his efforts in goodwill, such as hosting a charity event after All-Star Weekend in Los Angeles. No wonder Mitchell became a star, in sports and in fans’ hearts, so quickly! Read more. 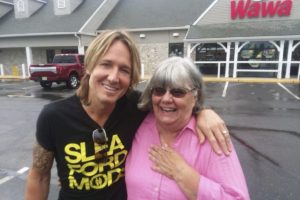 Wawa: World of amazing coincidences. Substitute teacher Ruth Reed said she made a resolution to help Wawa customers whenever possible, so she jumped at the chance when a man ahead of her in line was short on change for his order. Afterwards, he thanked her said his name was Keith, to which she remarked he looked an awful lot like Keith Urban. The country singer quickly assured her that he was, in fact, that Keith. A spokesperson for Wawa said they were “thrilled” by the story, and we have to say, we are, too. Read more.

This Manicure Meant a Lot More Than You Think

For Angela Peters, a trip to Walmart turned into a moment she’d never forget. When a nail salon refused to give Peters a manicure, since her hands shook due to her Cerebral Palsy, Walmart cashier Ebony Harris stepped in. She used her lunch break to sit down with Peters and paint her nails herself. “No matter the person, who they are, what color they are, disability, whatever, they’re people too,” Harris said. “She’s a girly girl. She’s just like you, me, Tasia [a nearby employee], my daughter, anybody. She wants to look pretty, you know, and so why can’t she?” The two, along with Tasia, a friend who captured the moment and shared it online, plan to continue their friendship. Read more.