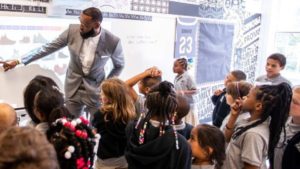 LeBron James opened his long-awaited “I Promise” school for at-risk youths in Akron, Ohio. This week, 240 young children began taking classes at the school, which is a joint venture combining Akron Public Schools’ curriculum and educational standards with James’ donations and outside-the-classroom goals. The school will focus on accelerated learning that gives kids the opportunity to thrive in spite of difficult personal or financial situations. On-site services are available for kids and their families, including job placement assistance for parents, a food bank to ensure families have enough to eat at home, and school activities to ensure the students use their idle time productively. Additionally, LeBron has included a memento from his own childhood: He often credits his bicycle with enabling him to explore and thrive, and each child attending school will receive their own bike. Read more.

For Sid and Jack Ryan Edwards, a trip to the grocery store turned into a moment of kindness and acceptance they’ll remember for years to come. When the father-son duo entered the store, Sid noticed that his son, who is on the autism spectrum, was watching one of the store employees stock the fridge intently. The employee, 20-year-old Jordan Taylor, also took note and asked Jack Ryan if he’d like to help with the task. The pair ended up stocking the fridge for half an hour. “It was a big deal,” Edwards said. Read more.

Ten-year-old Clark Kent Apuda has lived up to his name, just beating an American Olympian’s astonishing record. On Sunday, the young swimmer bested Michael Phelps’ 1995 100-meter butterfly time of 1:10:48 by finishing the same race in 1:09:38. Apuda, who has been swimming competitively since he was 7 years old, broke the record at the Far Western International Championship in Salinas, California (and beat all the competition by five seconds, to boot). No wonder his friends call him “Superman.” Read more. 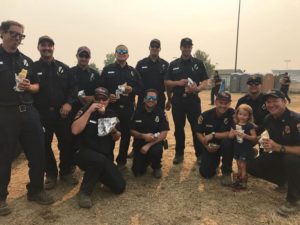 “Burrito Girl” is fueling the spirits of firefighters battling the destructive Carr wildfire in California. Two-year-old Gracie Lutz has gone viral after a video of her handing out breakfast burritos to firefighters in Anderson, California, coming off their night shift made its way around the web. Lutz, whose own uncles and grandfather are part of the troops fighting the Carr blazes, heard one of her uncles complain he was hungry after his shift, and set about feeding the entire Shasta District and Event Center with the help of her mother. Read more.

Seven-year-old Roman McConn started the foundation Project Freedom Ride, which has saved more than 1,000 dogs from dying in kill shelters. The foundation takes dogs from kill shelters in Texas and pairs them with families in the Pacific Northwest who have been looking to add a four-legged member. After Roman rescued his own dog, he realized that many dogs who aren’t adopted are euthanized in kill shelters. He began to make videos to help shelter dogs get adopted while his mother started advocating no-kill laws to legislators. Roman says that not only does it make him happy to help, but he likes to think it makes the dogs happy as well. Read more.