All-Star On and Off the Field: 19-Year-Old Player to Donate Winnings to Charity

The World Cup continues to be a global symbol of sportsmanship and goodwill even after it’s championship match. French forward Kylian Mbappe, one of soccer’s brightest rising stars, has announced he will donate 100% of his winnings to charity. The 19-year-old made $22,500 per game and received an extra $350,000 for his team’s victory — altogether, that’s more than $500,000. The “wonderkid” plans to donate the money to the Premiers de Cordee charity, an organization that helps disabled and hospitalized children engage in sports. Mbappe has supported the charity since June 2017 and is celebrated by his teammates for his character on and off the field. “When his schedule allows it, he intervenes for us with pleasure,” the charity’s general manager said of Mbappe. “He has a very good [relationship] with children, he always finds the right [words] to encourage them.” Read more.

Dad Surprised by Family With His Dream Car

Coby Oregon saved up and searched for two years for the car of his father’s dreams, finally finding a rare blue/green 1966 Ford Mustang in Baton Rouge, Louisiana. Cory and his brother got someone to act as if they were selling the car on the roadside, conveniently on the route the family took to get breakfast. The two sons convinced their father to stop and look at the car, and soon after revealed that they had already bought it, and it was his to keep. Read more.

The Virginia Department of Agriculture and Consumer Services (VDACS) is giving out free beehives and beekeeping equipment in an attempt to boost bee populations. In what they’re calling the Beehive Distribution Program, Virginia residents who are 18 or older are eligible to receive three free beehives a year. Once they receive the supplies, they will be registered with VDACS so that the department can periodically inspect the hives. If you’re interested in being a Virginia beekeeper, you can apply for the program here. Read more. 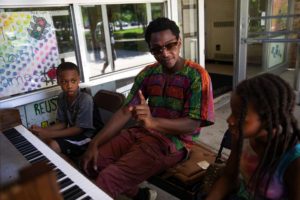 In Chicago the “Pianos in the Parks” program is inspiring children to learn music. Pianos in the Parks, founded by local musician Thaddeus Tukes, places pianos in certain parks one day a week and stations volunteer piano teachers at each to teach children simple chords, melodies, and songs in short, 10-minute lessons. The program is celebrating setting up its fifth piano this summer in popular Jackson Park. Read more.

Hunter and Lords, a Columbus-based tailoring company, is thanking veterans for their service by treating them to free, custom-made suits.  The store will pick eight veterans, nominated by friends and family, to receive suits valued at around $10,000, custom-made from head to toe (literally: even the socks are custom). Jim Rieser, the program’s creator, enjoys doing it every summer just to see the veterans’ faces after they put on their suits. The suits not only give the veterans a confidence boost, but give  them something to wear to job interviews after finishing their military service. Those who have received a suit in the past have said that they have helped them through the difficult transition back into civilian life. Read more.