Not Your Typical (Red) Wedding: ‘Game of Thrones’ Costars Tie the Knot 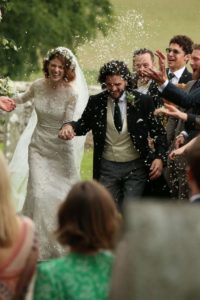 Finally, a “Game of Thrones” wedding with a happy ending. Costars Kit Harington and Rose Leslie, who you may know better as Jon Snow and Ygritte in the world beyond the Wall, tied the knot June 23. They were married at Scotland’s Kirkton of Rayne Church in front of family, friends, and cast mates, including Sophie Turner, Maisie Williams, Peter Dinklage, and Emilia Clarke. Here’s hoping these two have a long (and preferably arrow-through-the-heart free) life together. Read more.

In a small Texas town, one 6-year-old’s lemonade stand made a huge impact by raising $13,000 to fight family separation at the border. The stand’s proceeds went to Texas-based nonprofit RAICES, which provides legal and educational services for immigrants. On the first day of business, the lemonade stand raised $1,000, but the project really took flight when the family advertised their cause on Facebook, launching a fundraiser that collecting more than $12,000 in six days. This little lemonade stand has joined the cause of thousands of other people whose donations have raised enough money to triple RAICES’ original budget and help its attorneys reunite immigrant families who have been separated. Read more.

World Cup Encourages Sportsmanship On and Off the Field

The World Cup has long been a symbol of sportsmanship, but the teamwork doesn’t just stay on the field. Now, it’s in the stands, too. Fans of Japan’s soccer team received praise after they were seen cleaning up the Mordovia Arena where they watched their team score a 2-1 victory over Colombia June 19. The superfans corralled cups, napkins, and other trash into bags they’d brought with them to the stadium. Their goodwill seemed to set an example, as Senegal fans also cleaned their area later on in the day after achieving a 2-1 victory over Poland. Read more.

For Her 107th Birthday, This Woman Got a Parade 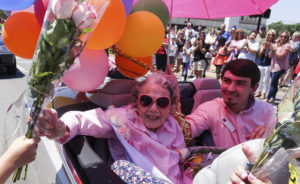 When Myda Lewis turned 107, she told her nurse that she has always wanted to ride in a convertible in a parade down Main Street. Planning started immediately: Staff at Physician’s Choice Hospice and Westhaven Nursing and Rehabilitation Center rented her a convertible. The nursing center asked businesses to come out and cheer for her, but after someone made an event on Facebook, a crowd of 800 people lined up along Main Street to wish her a happy birthday. It made her 107th birthday one she will certainly not forget. Read more.

Barbie continued to build her impressive resume this Tuesday when “Robotics Engineer Barbie” hit stores. This new collection aims to encourage interest in STEM careers for young girls. The dolls were made in partnership with Mattel’s parent company, Tynker, who created six free programming and coding courses for children that come with the dolls. “[It] allows a physical doll play where girls can imagine that they can be anything, particularly robotics engineer in this case, and then they can go online and through six free coding courses via Tynker, they can actually apply the skill and learn it and really potentially engage in a career in STEM in the future,” said Michelle Chidoni, vice president of global communications for Mattel. Read more.