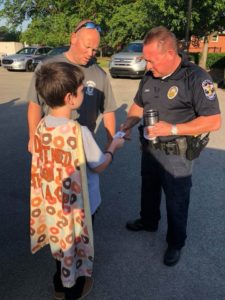 “Donut Boy” has a very specific (and very sweet) mission: thank every cop in America by delivering them their favorite snack. Over the past two years, Florida fifth-grader Tyler Carach and his mother have driven across 31 states delivering more than 65,000 donuts — and the number keeps growing. On his travels, Carach says he’s learned a lot about law enforcement and even wants to be a K-9 officer one day. He continues on his mission just to show his appreciation for officers, staying true to his catchphrase: “I donut need a reason to thank a cop.” Read more.

The small town of Plains, Georgia, got a helping hand from its biggest name when former President Jimmy Carter stepped in to open a primary care clinic in the area. The town had been one of many rural Georgia communities surviving without a practicing physician, but institutions like Mercer University School of Medicine and the Global Partnership for Telehealth are trying to change that. When Carter placed a call to the university, steps were put in place to bring a clinic to the town that would not only function as a health care center, but as an educational center for Mercer medical students. Read more.

One Man’s Trash is Another Man’s… Lunch?

In Leeds, England, one chef is sourcing his food from a very low-waste option: the trash can. As part of the Real Junk Food Project, chef Adam Smith creates his restaurant’s dishes from discarded food around town in an attempt to cut down on the global food waste epidemic. Annually, 50% of food produced around the world is wasted; that’s almost 2 billion tons of food whose energy ends up in the trash, rather than in our stomachs. Smith’s cafe is one of more than 120 eateries around the world pursuing the same mission: to reclaim junk food as gourmet. Read more. 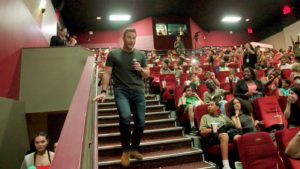 This summer, actor Chris Pratt brought “Jurassic World” to life for a group of young moviegoers.  The actor attended a preview of his franchise’s newest movie, “Jurassic World: Fallen Kingdom,” and met members of the Boys & Girls Clubs of America in the audience. Pratt himself raised money to fund a teen recreational center for the Boys & Girls Club in his own hometown last fall, making this encounter all the more special. “I’m a person of faith,” Pratt told TODAY news. “I believe there’s a reason I’ve been given this opportunity. I think that the only way for me to pay off the debt that I would incur by getting such an amazing life is to just reach out to kids and to be there for them.” Read more.

Age Is But a Number: 101-Year-Old Volunteers Every Day

Edward Kydd’s work with Meals on Wheels has allowed him to travel some 13,332 miles. And he has no plans of stopping, even at the age of 101. He drives his routes with his daughter every Monday to ensure that people are fed. He even believes the reason he’s still able to volunteer today is because of how active he is. Kydd shows that you can truly make a difference at any age! Read more.