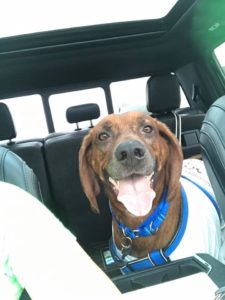 When Jake, a 7-year-old Coonhound, escaped his Arizona home in early 2017 and didn’t return home, his owners almost gave up on him — a year later, Jake was found in Roaring Spring, Pennsylvania more than 2,000 miles away from his home. Through Jake’s microchip, a veterinarian was able to contact the owners, who were overjoyed but had no way to make the cross-country trip to get him. The animal rescue group A Darrah Bull Bully Rescue stepped in and recruited 20 volunteers to pass Jake along and drive the three-day-trip back to his home, where his owners ecstatically embraced him. Read more.

The Sanik School Chhingchhip in Mizoram, India, admitted its first females students since the school opened in 1961. The school is also a preparatory program for entrance into India’s National Defence Academy and the Indian Naval Academy, which have also never accepted women as students. The Sanik School’s decision to accept women into its classes could influence other academies to change their policies, which have previously banned women from enrolling in their academies. Read more.

More Than a Job: Firefighter’s Kind Actions Go Beyond the Call of Duty

Chris Balzek, a firefighter with the Chattanooga Fire Department, arrived at the scene of a car crash involving a pregnant woman and her three children. After making sure none of the children were harmed, he removed the youngest, a 4-month-old girl, from her carseat and cradled her until she fell asleep in his arms. Being a father of four daughters himself, he felt it right to help calm her down: “It’s moments like this, that I am reminded, this is why I do the job,” he wrote on FaceBook. Fighting fires may be Balzek’s primary job, but there’s so much more to the role he plays in saving lives. Read more. 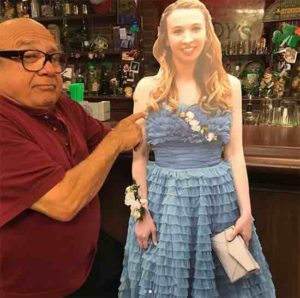 Instead of taking a classmate to prom, Allison Closs took the most inexpensive celebrity cutout she could find on Amazon.com — Danny Devito — and took him to prom instead. Allison dressed her cardboard cutout in real clothes and took pictures with it before heading off to the prom, where she danced with Devito’s likeness (attached to a tiny scooter). The pictures went viral, and soon Rob McElhenney, Devito’s co-star in “It’s Always Sunny in Philadelphia,” posted a picture of Devito holding a cutout of Allison captioned: “Hey Allison – I heard you took cardboard Danny to Prom. What a coincidence. He took cardboard Allison to Paddy’s…” Read more.

When Nobody Else Was Around, These Two Heroes Stepped In

In this week’s news, two people in two different states helped others around them in small acts of kindness. In Georgia, 8-year-old Maurice Adams asked his mother to stop the car after he noticed an elderly woman struggling to climb a set of stairs. He carefully escorted her and her walker up the small flight of stairs, and she gave him a hug once they reached the top. In Wisconsin’s Appleton International Airport, Green Bay Packers running back Aaron Jones was spotted wheeling a senior citizen through the building to get to her flight. Read more here and here.