Twenty-one years ago, Christin Gilmer received a long-term RSVP on her sixth-grade report card: “Keep up the good work!” wrote her teacher, Judith Toensing, in 1997. “Invite me to your Harvard graduation!” Last week, Toensing sat in the audience at the Harvard T.H. Chan School of Public Health and watched Gilmer cross the stage to receive her doctorate. In April, Gilmer wrote a Facebook post announcing her graduation and tagged her past teachers from kindergarten to college. This post included a special mention of Ms. Toensing and her role in teaching Gilmer about HIV and human rights, the very issues Gilmer dedicated her doctoral studies toward. “I was letting her know how important she was to me, that she passed the torch,” said Gilmer to Good Morning America. After the Facebook post was shared, Harvard reached out to Toensing and invited her, all expenses paid, to Gilmer’s graduation. Read more.

Read All About It: Mother-Daughter Duo Donate Books for Summer Reading

In Old Fort, Tennessee, a mother-daughter duo have made it their mission to battle the “summer slide” and keep kids reading over the summer break. JoAnn Hooker and her daughter Sara Weaver both work at South Polk Elementary School where they’ve pursued their summer reading initiative since 2014. They supply each student with 10 books at an end-of-the-year giveaway, collectively purchasing more than 160,000 books for the cause. “Some students have no books at home, so this is big to inspire them to pick up a book during the summer,” said Joel Cox, school supervisor. Their efforts were recently recognized by Newschannel 9 and McMahan Law Firm’s “Pay It Forward” campaign, which awarded them $500 on behalf of the South Polk community. Read more.

Good Mornings Begin with a Handshake and a Smile

Ashley Coston Taylor, a kindergarten teacher in Texas, makes sure each school day starts with a handshake. No, she doesn’t give a handshake to each one of her students; instead, she assigns a student “greeter” who stands beside the door to shake hands and say good morning to each of their fellow classmates before they enter the classroom. A handshake isn’t required, however– hugs are accepted, as well. Taylor started the exercise to not only show her students what good manners are, but also to make sure that they know they are never alone and that their class is a team. Read more.

Dedicated Student Receives New Wheels Along with Cap and Gown 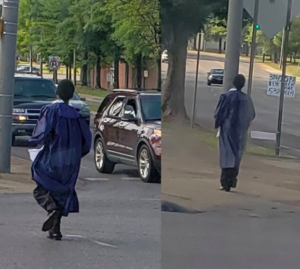 Corey Patrick is a high school student whose only way to get to school is to wake up at 4 in the morning from Monday to Friday to take the public bus. His family moved right before his last year of high school, placing him 10 miles, an hour-and-a-half commute on public transportation, from his school in Alabama. Patrick gained attention after the bus driver snapped a picture of him making his way to graduation with his cap and gown on, praising him for his persistence despite a rough daily commute. The photo grabbed the attention of radio host Rickey Smiley, who gave Patrick a brand new car to reward him for his perseverance. Read more.

In the midst of exam season, an 11th grade teacher is making sure he’s doing all he can to ensure his students’ success: He’s feeding their minds with knowledge and their stomachs with old-fashioned PB&Js. Brian Johnston, a teacher at Clear Springs High School in League City, Texas, handmade more than 50 peanut butter and jelly sandwiches, complete with whole-grain bread and natural PB&J, for his students to eat before entering their three-hour AP English exam. “Students are usually absolutely exhausted for the rest of the day after these exams,” Johnston told TODAY Food. “They have to go in with something in their oven.” Read more.