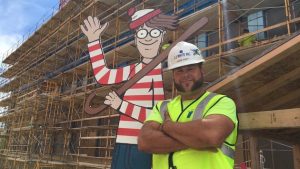 One construction worker in Indiana has found an easy way to make a kid’s day! Jason Haney, who is working on expanding Memorial Children’s Hospital, got inspired by a co-worker to create a giant Waldo cut-out that he hides in various parts of his construction site. Pediatric patients at the hospital love to look at their window and search for Waldo’s newest hiding spot. “It’s just for the kids to get their minds off of things,”Haney told The Huffington Post. “I just wanted them to have fun.” Read more.

Two Grandmothers Get a Chance to Be Flower Girls Again

One soon-to-be-married couple wanted to honor their grandmothers at their wedding, so they asked them to be the flower girls! Bride Maggie Wakefield explained that she and her husband wanted the two women to have an important role in the ceremony, as both grandmothers influenced their lives. The women were seen walking down the aisle together in matching dresses they both picked out, proving that you’re never too old to be a part of the fun! Read more.

Improving Community Relations, One Burger at a Time

In an effort to strengthen the relationship between police and the communities they serve, members of the Wichita, Kansas, police department held a cookout with members of the local Black Lives Matter movement. The group spent the afternoon enjoying a barbecue, talking, dancing, and playing basketball. One woman whose children attended the event said, “It was a bonding moment where the police saw them as children and my [sons] got to see them as people.” Read more.

Good Neighbors: How an 8-Year-Old Brightened the Postman’s Route

Small acts of kindness are always appreciated – just take it from this mail carrier from Virginia who got a sweet surprise from a neighborhood member. When the heat index jumped to insanely high temperatures this week, 8-year-old Carmine McDaniel decided to leave a cooler of Gatorade out for the mailman. McDaniel’s mother recorded the postman finding the cooler on her cell phone. The postman loved the Gatorade, and Carmine loved making his day! Read more.