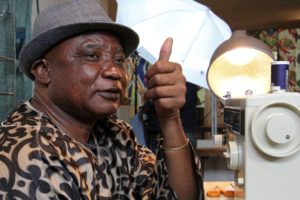 Congolese refugee Remmy Kasongo has found a way to use his skills in his new life in Lancaster, Pennsylvania. Bryan Norris, a men’s fashion designer, met Kasongo when he gave a talk to a local sewing group. When Norris found out that Kasongo used to be a dressmaker, they arranged to have Kasongo sew a line of tote bags for Norris. They sold quickly, and shortly thereafter, The Refugee Maker’s Project was born. The project aims to find refugees jobs using skills they already possess and help them adjust to their new surroundings while earning an income. For Kasongo, this venture has been a success. Norris says the project has given him “new purpose” at age 60. He drives Kasongo to work and English class three times a week. Read more.

So You Think You Can Dance … to Home Plate

There’s nothing quite like the feeling of hitting a homerun. And what better way to express that feeling than through dance? Billy, a young boy with Down syndrome, busted out some fantastic dance moves while playing baseball in the League of Yes. This baseball league, based in Long Island, New York, is for people all of ages with disabilities, to “develop social skills and increase self esteem.” Billy’s self esteem seemed appropriately high after hitting a homerun. He danced all the way to home plate,  surrounded by friends and volunteers cheering him on. The video is sure to put a smile on your face. Read more.

An anonymous donor helped erase more than half of the student lunch debts in the Westbrook, Maine, school district. The donor gave $10,000 to help ease the total $17,000 debt. The amount is equivalent to 4,300 school lunches. Westbrook Superintendent Peter Lancia says the priority is obviously children’s well-being, not whether they can pay, stating, “We feed kids, and we settle the bills with parents later.” Veronica Bates, Westbrook School Committee member and chairperson of its finance committee, called the money a “godsend” and says, “I cannot express my gratitude enough.” Read more.

When Being Shady Is a Good Thing 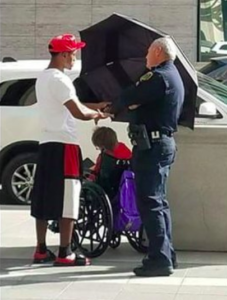 Louis Jordan was picking his mom up from work when he noticed a senior woman waiting for the bus outside. Not wanting to leave the woman sitting in the “unbearably hot” Houston, Texas, sun, he jogged over with an umbrella in hand. The MetroLift she was waiting for took an hour and 45 minutes to arrive, so Jordan stayed and chatted. The two have now become pals, with Jordan heading over with his umbrella whenever he sees her waiting. His mom snapped of photo of the two, which immediately went viral. Jordan’s mom told a local news station: “I am one proud mama.” Read more.

You’re Never Too Old to Code

There’s no excuse for your parents calling you for computer help anymore. Eighty-two-year-old Masako Wakamiya of Japan just became the world’s oldest app developer (according to Apple CEO Tim Cook). She created the free iOS game, Hinadan, specifically geared toward an older audience. The app now has about 53,000 downloads and almost five stars in the Apple App Store. Wakamiya hopes she inspires others, saying, “By teaching [seniors] to do new things, it gives them an excitement, a motivation — I really like that feeling and being able to share that.” Read more.