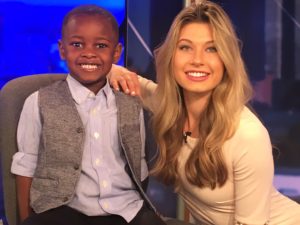 Move over Avengers, we’ve got a new favorite superhero. When 4-year-old Austin Perine found out what the term “homeless” meant, he was upset that people are left without food and shelter. Determined to do his part, he asked his parents to start funneling his allowance money, along with any money they would spend on toys, into a fund to buy chicken sandwiches to feed the homeless. Dressed aptly in a red cape, he turns into his alter ego “President Austin,” handing out sandwiches in his hometown of Birmingham, Alabama, with the reminder “Don’t forget to show love.” Austin calls feeding the homeless the highlight of his life. When you ask Austin what drives him to do it, he’ll tell you, “It’s just the right thing to do.” Read more.

3-Year-Old Is BFFs With His Garbage Men

Every Tuesday, 3-year-old Kyler Reynolds waits excitedly outside his Mississippi home for his good friends to make their weekly visit. As he sees the garbage truck head around the corner, he breaks into a happy dance and prepares to hand over the snacks he bought for his buddies. The friendship started with a friendly conversation after one of the sanitation workers noticed Kyler’s grandmother’s Alabama sweatshirt. After that, Kyler began waving excitedly every time he saw the men. Finally, around the holidays, Kyler and his grandma made treats for the workers, and a tradition began. Kyler waits with food, and his friends stop by to thank him and show him how to operate the truck. The video might just be the sweetest thing you see all week. Read more.

Medical Emergency at Comedy Show Is No Joke

If you have a medical emergency at a comedy show, the last person you might expect to help you is the comedian. But when the comedian you’re seeing just so happens to have a medical degree, you’re in luck. During Ken Jeong stand-up show, an audience member started to have a seizure, and the actor/comedian who also happens to be a doctor jumped off stage to help. Jeong, along with an audience member who was an EMT, looked after the woman until paramedics could arrive. Jeong, who is most well known for his parts in “The Hangover” and “Dr. Ken,” no longer practices medicine, but did receive his MD from UNC Chapel Hill in 1995. Read more.

And I Will Always Love Dolly Parton 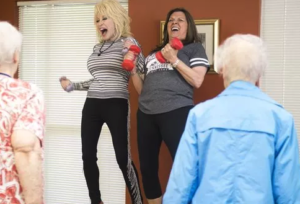 The Tennessee Sevier County Senior Center got a surprise visit from a country music icon this week. Dolly Parton showed up at the renaming ceremony in her home county, as the center was newly dubbed My People Senior Activity Center in honor of Parton’s parents. While at the facility, she toured the premises, performed some music, and even took part in an exercise class. Parton told the members, ”I am so excited to be part of this today. Of course, you know I’m a senior too.” Dolly Parton, we will always love you! Read more.

Reunited at the Finish Line

When Carlos Gonzalez started playing basketball on the same team as Zach McKinnon, neither had any idea of how their lives would change. Mike McKinnon, Zach’s dad, was the coach of that basketball team, and soon he and his wife Julie started to notice that Carlos was struggling. When Carlos’ mom left and he was evicted from his apartment, Carlos needed a place to stay. Mike and Julie offered up their home, and a few days turned into a few more days, which turned into a few more days, until the McKinnon’s realized that Carlos was the missing piece of their family. Even though they already had three kids to feed, Julie says she and Mike never hesitated in offering Carlos a home. “He’s one of my babies,” Julie said. Now with Carlos getting ready to graduate from college with a degree in Business Management and plans to join the family business, Julie and Mike couldn’t be more proud of their son. Read more.