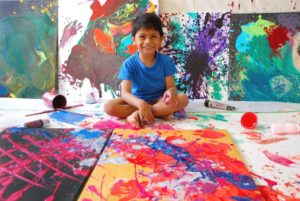 Like most kids, Advait Kolarkar loves dinosaurs and space. On top of this, he has a fascination with art that started when he was just 3 months old. Kolarkar uses galaxies and dinosaurs to inspire his colorful and imaginative paintings. The 4-year-old art prodigy has had two solo exhibitions and has sold 28 paintings. Now, his art is going to be exhibited at New York’s Artexpo. He is the youngest artist to participate in the expo’s 40-year history. Read more. \

Doing the Right Thing: A Lesson for All Ages

Jaron Johnson may only be 8 years old, but he can teach us all something about doing the right thing. When Jaron walked into his local WalMart in Louisiana with his mom, he found a $100 bill on the ground. Instead of keeping it, Jaron wanted to find the rightful owner. Jaron’s mom, Jodie, told him that they would take the bill home to brainstorm ways to find the owner. The next day, Jaron suggested calling the WalMart to see if they had any reports about missing property, and Jodie left her phone number. Later that day, Jodie got a call from the daughter of 86-year-old James Grice, who lives on a fixed income, and when he lost his $100, he wasn’t able to buy his groceries. James was overwhelmed with joy when he realized that Jaron didn’t keep his $100. A few days later, the two met so Jaron could return the $100, and James gave him $20 and a permanent invitation to have fresh tomatoes from his garden, which just so happen to be one of Jaron’s favorite foods. Read more.

University of North Florida female engineers really made a splash over spring break by bringing running water to Guatemalan village La Esperanza. The girls gave up a traditional spring break trip to dig trenches and install pipes to carry water. The girls did a year’s worth of prep work to design a new drinking water distribution center, which was installed on the trip. Now every home has water, when before the villagers had to hike miles to retrieve it. Beyond just the irrigation, this was the first time that many of the villagers had seen female engineers. It was inspiring for the villagers and also for the young women who have all made plans to continue working on water solutions in their professional careers. Read more, 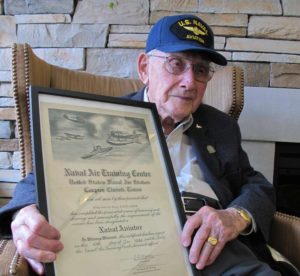 World War II Veteran Bob Barger finally received his degree 68 years after earning it. At the end of World War II, Barger was more interested in settling into his career and raising a family than finishing college. Several years ago, Barger struck up a friendship with Haraz Ghanbari, the director of military and veteran affairs at Barger’s old school. Ghanbari was shocked that despite going to school full time for three years, Barger didn’t earn a degree. When the school went back to its records, they discovered that Barger actually qualified for an associate’s degree, which was not offered when Barger was in school. Barger will receive his degree on Saturday, and his nursing home has a  a big graduation party planned to celebrate! Read more.

The Longest Run to Home Plate

Three-year-old Lennox Salcedo’s future might not lie in MLB, but he may have a shot at SNL. During his latest baseball game, Lennox’s coach told him to run home as fast as he could from third base. The adorable boy decided to have a little bit of fun with his coaches instructions and “ran” home in extreme slow motion. Even when Lennox’s dad tried to usher the boy along, Lennox kept on with his triumphante slow-motion score, which lasted for 45 seconds. Read more.