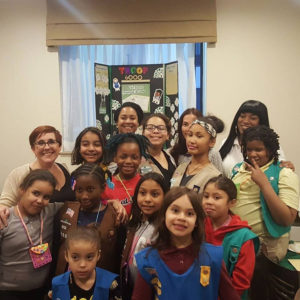 This New York Girl Scout troop was the real MVP this cookie season. Troop 6000 sold more than 32,000 boxes of cookies in one week. But what makes this troop really special isn’t the cookies that they sold, but the girls who sold the cookies. Troop 6000 is made of 300 girls living in homeless shelters. The girls got special permission to sell their cookies at Kellogg’s NYC cafe in Union Square for their first-ever sale. The girls’ sales totaled some 32,500 boxes of cookies and they raised more than $15,000 in additional donations to help fund future troop activities. Read more.

You Can Teach an Old Dog New Tricks

A 17-year-old, deaf, and partially blind dog is definitely an unlikely hero, but that is exactly what Max is. This amazing dog stayed outside for 15 hours in the harsh, rainy Australian bushland with a 3-year-old girl who had wandered away from home and gotten lost. The little girl, Aurora, went missing on Friday afternoon, and the next day, there were more than 100 people searching for her on her family’s rural property. When Aurora’s grandmother, Leisa, joined the search, she heard Aurora’s cries coming from the mountain. As she climbed, Max ran down to lead Leisa to Aurora. Aurora was unharmed except for a few cuts and bruises, and Max was made an honorary Queensland police dog for his bravery. Read more.

Calling all 90s Nick fans! The classic Nickelodeon show “Double Dare” is coming back this summer, and it’s going to be messier and crazier than ever. For anyone who doesn’t remember (or wasn’t alive), the show ran from 1986-1993 consisted of two teams competing for prizes by answering trivia questions and doing physical challenges like sliding into a tub of Jell-O. Nickelodeon officials have called this the “messiest reboot of all time.” I double dare you to watch. Read more.

Opening Pitch is a Home Run

Throwing the opening pitch at a San Francisco Giants game was extra special for 8-year-old Hailey Dawson. Dawson was born with a rare birth defect that affected her hand. Four years ago, the engineering department at the University of Nevada came together to create a 3D-printed hand for Dawson. They created multiple versions, including a special Giants-themed one that she used to throw the perfect opening pitch on game day. Read more.

A Different Kind of TSA

Inspired by advice from her father to find a need and create a unique way to solve it, Jessica Johnson started The Scholarship Academy (TSA) in her dorm room at Howard University. TSA is a nonprofit that believes every student should have the chance to pursue a degree debt-free. The organization works with low income and first generation families to create 4-year funding plans. TSA helps students learn how to negotiate financial aid, manage financial awards, create scholarship brag projects, and navigate the world of private scholarships. Since its inception in 2006, TSA has helped raise more than $35 million in private funding, which has reduced TSA students’ debt by an average of $14,000. The ultimate goal of TSA is to eliminate the equity gap and to stop the cycle of poverty. Read more.