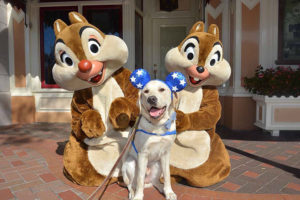 What happens when you put man’s best friend in the Happiest Place on Earth? Pure (Disney) magic. Recently a group of service dogs took a group trip to Disney World. The atmosphere of Disney teaches the dogs patience and attentiveness in a challenging environment. But it wasn’t all work and no play. The dogs got to go on rides, meet some iconic characters like Winnie the Pooh, and even try on some Mickey Mouse ears. According to the handlers, the dogs loved it and will be back for another visit this fall. Read more.

Everyone knows that Florida makes the best orange juice, but that’s kind of hard to do when most of the trees are destroyed. A local teen, Theo Quenee, realized that after hurricane Irma, many of Florida’s mangroves might never grow back. He went about collecting and growing more than 500 new trees. Originally, he collected the seeds and made his own small greenhouse. As the plants got bigger, Quenee and his friends began transplanting them into a sandbar and mudflat in Miami. Mangroves play an essential role in stabilizing the coastline from erosion. Read more.

In a League of Their Own

Of the 280,000 applicants to Ivy League schools, less than five people got accepted to all eight. Two of the amazing students who were accepted to all eight were Mekhi Johnson and Michael Brown. When he was a kid, Johnson heard a news story about a student who had been accepted to all eight Ivy schools and that became his dream. It turns out, dreams do come true. Brown applied to the top 20 schools in the country and was accepted into all of them. Even more impressive,  all 20 offered full scholarships. Neither are sure which school they’ll be attending yet, but we’re sure both their futures are bright! Read more here and here. 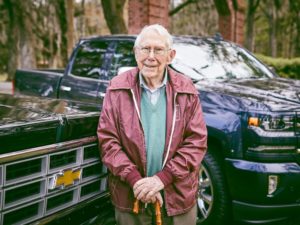 Not many people love Chevrolet as much as Paul Hitch. Though Hitch, who recently turned 101, retired 40 years ago from being the chief engineer for the auto company, he still talks about it every day. Naturally, when he realized that his beloved former employer was celebrating its 100th year, he wanted to get in contact with them, and maybe even speak to the person doing his former job. After Paul’s son made a few phone calls, the current chief engineer at Chevy, Eric Stanczak, was knocking at Paul’s door. The two men talked about trucks, the evolution of the auto industry, and even FaceTimed with current GM CEO Mary Barra, who’s father Paul worked with. Paul said that he never had any other dream than to be an engineer with Chevy. Read more.

When Jimmy Gilleece, a bar owner, was approached by a woman who lost her wallet in his bar, he spent hours combing over security footage for her. Eventually, he found footage of the wallet being stolen by a young man. Gilleece found the thief, a young man named River Pithers. Gileece asked Pithers what he did with the wallet, and Pithers told him that he threw it into the ocean after taking the money. A team of divers eventually found the wallet, which contained the customer’s wedding ring, but Gilleece was determined to help Pithers, who he found out was sleeping in the woods. Instead of turning the video into the police, Gilleece invited Pithers to live at his house and helped him find two jobs. “I could tell he wasn’t a criminal,” Gilleece said, “He was just someone who needed a little help.” Read more.