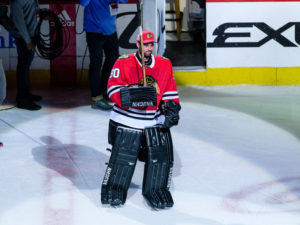 The Blackhawks Were Ac-counting on Him

You don’t normally expect the MVP of a hockey game to be an accountant, but that’s exactly what happened at last Thursday night’s Chicago Blackhawks game. Scott Foster played on his college hockey team and still competes in a local men’s league. On Thursday, Foster was signed on to be the emergency backup goalie for the night. The job normally includes sitting in the press box and watching the game. But in this case, the team’s goalie and the backup goalie were out of commission, and Foster was told, “Put your helmet on.” Foster went into the game, where he blocked shot after shot and helped secure a Blackhawks win. You’ll never think of your friend who plays in an amateur league the same way again, will you? Read more.

Baskets of Blessings for Fifth Graders

When fifth grade teacher Brent Walker posted on Facebook asking for 20 of his friends to donate $10 so he could buy Easter baskets for his class, he never imagined he would get the response he did. Within an hour of his original post, Brent raised over $700. With this extra money, he decided to buy Easter baskets for the other two fifth grade classes at his school. Brent originally had this idea because he didn’t know how many of his students would receive an Easter basket from home. The baskets were filled with everything from art supplies to basketballs, in part thanks to WalMart, which gave Brent a discount on everything he bought for the baskets. The extra money donated is going to incentives, prizes, and parties for the students across all three classes. Read more.

For the last 19 years, Liz Soden has been confined to a wheelchair after a car collision left her paralyzed. But that doesn’t mean she’s been left out of her family’s adventures. Her husband Brad didn’t want to leave her behind when their family went hiking, so he resolved to build Liz an all-terrain wheelchair. Brad has no college degree or engineering background, and was told by multiple engineers that his dream was impossible, but this didn’t stop him. After years of training, Brad built what he named TankChair. Instead of normal wheels, TankChair has treads that can cross land, snow, mud, and water. Brad has now sold his TankChair to people all over the world, but he isn’t in it for the money, he’s in it for the smiles and the families that he’s helped. Read more. 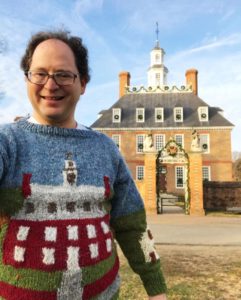 Samuel Barsky is not content with just seeing landmarks; he wants to wear them too. Barsky has been knitting sweaters with familiar scenery and tourist attractions for the past 20 years and has made 119 sweaters to date. He now averages about one sweater a month. If Barsky knows that he is going on a trip, he makes a sweater with a corresponding landmark. Then he takes a picture in front of the landmark while wearing the sweater. His Instagram feed is a knitter’s trip around the world. It features pictures of him wearing sweaters of Niagara Falls, the Hollywood sign, and plenty of other landmarks. Read more.

When 2-year-old Samantha Holmes gave her dad a stuffed animal to take to work with him in case he missed her, it was a sweet gesture. What’s even sweeter? Her dad still takes that little turtle to work every day 18 years later. The turtle goes everywhere with Holmes, even on business trips. He surprised his now 20-year-old daughter when she was home on break by showing her that he still carried it around. Holmes says that the stuffed animal helps keep a piece of his kids with him even when they aren’t there, which is why he’s going to keep it in tow. Read more.