March Madness: Livin’ on a Prayer 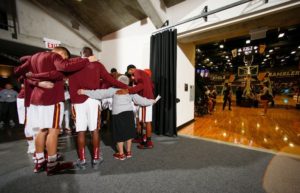 While it’s true that some sports teams say a prayer before a game, not many have a nun in their huddle. But that’s the case for Loyola University-Chicago’s basketball team. Ninety-eight-year-old Sister Jean has been praying in the Ramblers’ team huddle for 33 years and has only missed two games in that time period. The players and coaches recognize her as an important part of the team — she even has her own bobblehead, plaque in the school’s hall of fame, and customized maroon sneakers. Sister Jean’s prayers were answered yesterday when the Ramblers advanced to the next round of the NCAA Tournament with a buzzer-beating three-pointer. Read more.

Sit Back, Relax, and Adopt!

Everyone loves curling up in a comfy chair at the end of the day, and that includes adorable shelter pups! On Monday, an Illinois shelter released a video with a couple of their dogs relaxing in armchairs and a request for more pieces of comfortable furniture. There was an outpouring of chair donations to the shelter, enough that all of the pets now have their own. But it didn’t stop there, chairs have been donated to shelters across the country, helping dogs feel a little more at home until they find a forever home. Read more.

Birds of a Feather Selfie Together

Millennials aren’t the only ones obsessed with selfies. When Eddie Gault, a member of the Australian Antarctic Program team, which is division of the Australia in Antarctica program that studies a wide variety of topics including penguins, left his camera out on the ice, it didn’t take long for two penguins to discover it. In the adorable video, the penguins are seen investigating the strange object and end up starring in their own selfie video. The program that shared the videos said it wasn’t surprised that the “naturally curious birds…seized the opportunity for a selfie.” Read more. 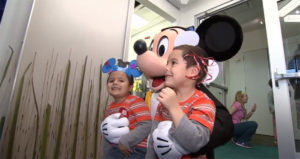 The magic of Disney is about to come to hospitals around the world. Disney has dedicated $100 million to reinvent the patient experience in children’s hospitals and has assembled a team of heros to help identify the biggest sources of stress for kids and their parents. Disney hopes to use its characters and stories to help make hospitals more friendly and inviting for the families who have to spend time there. The magic will begin with Texas Children’s Hospital, the largest children’s hospital in the country. Read more.

Whether you’re looking for a new favorite animal or just a good laugh, these zookeepers have you covered. Zookeepers all over the United States have started tweeting out Yelp-like reviews of different animal species. The Oregon Zoo kicked off the trend, tweeting a picture of an otter with the caption: “4/5 stars. Overall very good first impression. Sturdy built, totally winter ready and waterproof. Only comes in brown but that’s actually a plus for me. #RateASpecies.” This #RateASpecies trend is similar to the #CuteOff competition from 2017 in which zoos competed by posting their cutest animals. Read more.