From Staring at a Portrait to Dancing with Her Hero 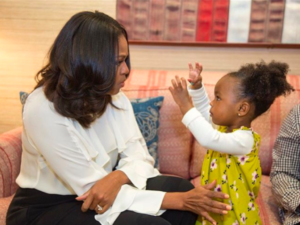 Everyone loves a good dance party, even former First Lady Michelle Obama. Last week, a photo of 2-year-old Parker Curry mesmerized by the official portrait of Obama in the National Portrait Gallery went viral. Shortly after, Parker and her mom appeared on AM to DM where Parker said she wanted to meet Michelle Obama because she’s a queen (of course). On Tuesday, Parker’s wish came true when she got to meet the former First Lady and have a private dance party with her. Keep on rocking, Parker! Read more.

With Easter rapidly approaching, I’m sure you’re thinking of spring, bunnies, and most importantly Easter eggs. The Tampa Bay Regional Area Bomb Squad is helping to make this Easter extra special for kids this year. The squad is building beeping Easter eggs as part of an upcoming Easter egg hunt for visually impaired children. Egg hunts are a very visual activity, with children grabbing every egg that they see. The beeping eggs will allow the visually impaired kids to participate in the hunt and find eggs, too. And, kids can take the eggs home with them to be used again at other Easter egg hunts. This should be an egg-cellent event! Read more.

A double EGOT might sound like a rare medical procedure from “Grey’s Anatomy,” and it is pretty rare (just not medical). On Sunday night at the Oscars, Robert Lopez became the first person ever to double EGOT, meaning he has at least two Emmys, Grammys, Oscars, and Tonys. Lopez previously won an Oscar for a little song called “Let It Go” from “Frozen” four years ago and won on Sunday in the same category. Even more amazing, Lopez is only 43 years-old and was the youngest EGOT ever when he won his first Oscar at just 39. Read More.

How Many Alligators Does it Take to Make This Dog Happy? 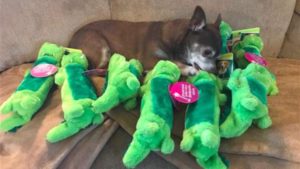 Twitter saves the day for this pup. Since he was adopted in 2014, Jaxon has had his favorite stuffed alligator toy. But as you know may know, dogs they tend to destroy even their their most beloved toys, so his owner Kelli got very used to replacing it. Recently, she went to replace the toy and was shocked to find that it had been discontinued. Kelli took to Twitter to find the stuffed alligator, putting out a request for any remaining plushies. Fortunately, she was answered by a PetSmart employee in Texas who found eight of the toys in the discount bin and happily sent them to Kelli and Jaxon. Read More.

The Mother of All Surprises for Basketball Player

When NCAA basketball player Norbertas Giga walked into a conference room at a hotel in Evansville, Indiana, he was expecting to watch film, but instead he was met with the sight of his mother, who he had not seen in five years. In 2013, Lithuania native Norbertas moved to the United States to play basketball, leaving his family behind. Now five years later, while preparing for the Ohio Valley Championships with Jacksonville State, Norbertas’s coaches and teammates planned the major surprise for him of flying his mother in from Lithuania to see her son play in person for the first time. He cried several happy tears upon seeing his mom (and so did we). Read More.