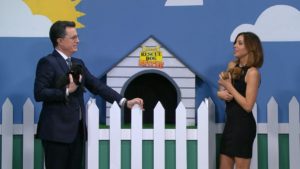 After getting too sad from seeing depressing pet rescue ads, Stephen Colbert and actress Aubrey Plaza took a new approach to get some sweet pups adopted: straight-up lying. “If you’re not willing to lie for an adorable puppy, you belong in a shelter,” Colbert said. The hilarious bit included the pair listing larger-than-life qualities for each rescue dog. Holding up a hound mix named Ace, Plaza proclaimed, “He can talk but chooses not to as a form of protest against wage inequality. Ladies, he gets you!” Read more.

After more than 170 headstones were vandalized at the Jewish cemetery in St. Louis, Missouri, the Muslim community took action, launching a fundraising effort that has raised more than $85,000 to help repair the damages. “Muslim Americans stand in solidarity with the Jewish-American community to condemn this horrific act of desecration,” the fundraising page states and pledges to rebuild the sacred space. Read more.

A Blessing at Walmart

When Ashley Jordan and her husband Michael were in the checkout lane in Walmart, the last thing they expected was a blessing from a kind stranger. Their cashier, Sharnique Dasant, told the couple that they looked like they needed a blessing, and proceeded to cover half of the couple’s $200 grocery bill with her own personal credit card. Ashley was so moved by the act of kindness that she took a picture with Sharnique and posted it to Facebook, where it got more than 22,000 likes. Read more.

Kung Fu Grandma Is Not Stopped by Age

If you truly love doing something, you will carry that passion with you for the rest of your life. No one exemplifies this better than Zhang Hexian. At 93 years old, she has been practicing kung fu for almost as long as she has been alive. Starting when she was 4, she was taught kung fu by her father as part of a family tradition that has lasted for more than 300 years. Her notoriety has led to her gaining the nickname “Kung Fu Grandma.” “I never thought about being famous,” she said. “If people love kung fu, my family can teach them. We have been teaching people around here — but I never imagined we’d get the attention of others around the world.” Read more.