Companionship Is Served at This Dinner Table 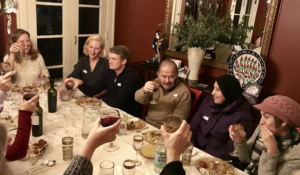 In times where it seems like the country is divided, it is the unity of ordinary citizens that drives hope. At the Syrian Supper Club, unity is practiced with every meal. The club hosts a series of dinner parties where Muslim refugees cook for meals hosted primarily by Jewish New Jerseyans. The get-togethers are part fundraisers for the refugees and part learning opportunities for everyone. The group sits together, trades stories and laughs like true friends. “I think we are providing some affirmation of their talents, of their capabilities, of their humanity in a political climate where they’ve been demonized,” said Kate McCaffrey, a member of the dinner organization effort. “And for the guests, it’s an opportunity to get outside their bubble to meet people different from them.” Read more.

Teacher Has “Welcome to Class” Handshakes with Every Student

Fifth grade English teacher Barry White Jr. knows the importance of starting class off on the right foot… or rather, hand. That’s why the teacher at Ashley Park School in Charlotte, North Carolina, welcomes students to class with intricate personal handshakes unique to every student, inspired by their personalities. “I’m always pumped up and then we start doing the moves and that brings them excitement and pumps them up for a high-energy class,” White says. Administrators are also responding to the positivity. “The only way to help our scholars achieve at high levels every day is to embrace the need for meaningful and deep relationships,” Principal Meaghan Loftus says. “Barry’s handshakes represent his own authentic take on building those relationships. When I walk into my teachers’ rooms, I see the impact of those strong and trusting relationships.” Read more. 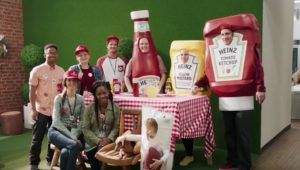 Kraft Heinz has decided to do something a little different instead of spending $5 million on 30 seconds of ad space during the Super Bowl. The company is giving all of their salaried employees a day off the Monday after the game. Statistics show around 16 million people call out of work, and the country loses about $1 billion because of worker unproductivity the day after the big game. “The Heinz brand doesn’t settle on delivering superior taste or quality, and we don’t believe America should have to settle on the day after the best sports day of the year,” Nicole Kulwicki, the head of Heinz brands, said. Read more.

Young Boy Becomes a Sam’s Club Employee for a Day

What started as a routine trip to Sam’s Club for April Rouse and her 6-year-old son Carter, who has Down syndrome, turned into a trip they won’t soon forget. Carter wanted to see the cash register up close and learn how it worked, so the cashier let him scan every item. Then, store manager Mike Russo asked if he could borrow Carter for a moment and came back with him clad in a Sam’s Club vest. Russo let Carter walk around the store with his vest on, so Carter could meet other employees and customers. Carter loved every minute of getting to meet so many new people and letting his amazing personality shine. Read more.

‘Robin Hood Restaurant’ Charges Those of Means and Feeds the Poor 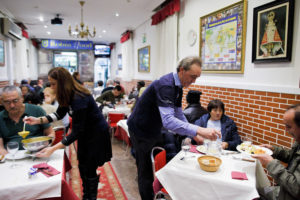 Spain’s most sought-after lunch reservation isn’t at a restaurant you might think. The Robin Hood restaurant in Madrid operates on a unique model, opening to paying customers for breakfast and lunch and dedicating their dinner service to feeding the homeless free of charge. The model has taken off, with celebrity chefs vying to cook once a week, and lunch reservations booked through March. The restaurant is run by an 80-year-old Catholic priest named Father Ángel who wants patrons to dine on the same quality food with the same dignity as any other customer. Read more.