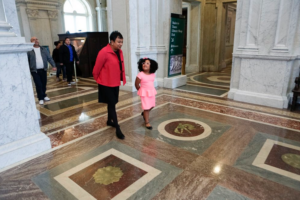 Daliyah Marie Arana is just 4 years old, but she’s already read more than 1,000 books – before most of her peers can even read. Arana, who began reading at just 2 years old, received the honor of being librarian for the day at the Library of Congress. Though Arana can now say she’s visited the world’s largest library, she’ll still be frequenting her local Gainsville, FL library, checking out books every day until she reaches her next goal – 100,000. Read more.

Michelle Obama’s last appearance on the “Tonight Show” as first lady was emotional for everyone. During a moving segment on the show, fans were brought into the studio to record goodbye messages for the first lady. To their surprise, Obama was watching it all unfold and stepped out from behind the curtain. “This was not what I was expecting,” one woman said, tearing up. “I was eating pizza bites yesterday in my bed, and now I’m meeting the First Lady. Like, what?!” Read more.

It’s never too early for an Easter egg hunt. That’s what children on the German island of Langeoog discovered when a container ship carrying tens of thousands of Kinder Surprise Eggs were accidentally released after a storm. Langeoog’s mayor invited local children to a giant egg hunt to clear the plastic eggs that washed up on its shores. The children happily took him up on the offer. Read more.

U.S. Virgin Islands Will Pay You to Go on Vacation

Looking for a destination for your next vacation? In honor of the centennial celebration of Denmark selling the islands to the United States, visitors who come for a stay of three nights or more will receive $300 in spending credits for tours and activities. Planning to spend time in the turquoise water and warmer temperatures is certain to help you beat the winter blues. Read more.

Retiree Knits Socks for the Homeless

When Bob Rutherford’s wife died in 2010, he felt like he had nothing to do, until his son told him, “If you want to help yourself, help somebody else.” The 88-year-old took that advice to heart, firing up a knitting machine he had made a decade ago, and weaving more than 10,000 pairs of socks for the homeless. Dubbed “Socks by Bob,” the living room project provides shelters across Canada with warm socks for those in need. Read more.