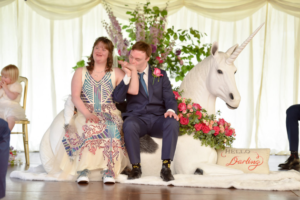 A fun, confetti-filled wedding day marked the beginning of Polly Gibson and Joe Minogue’s marriage. The couple, who both have Down syndrome, celebrated their “Wed-Fest” with family and friends in England. There was dancing, dancing, and more dancing, along with a unicorn throne, singing waiters, and a sprinkle cake. “My advice to other couples, especially to young adults with special needs, is to live the dream, believe in yourselves and that anything can be possible,” Polly said. Read more.

Tough day at the office? Personal problems? Pull a chair up to 11-year-old Ciro Ortiz’s table. Every Sunday, this “kid therapist” sets up shop in the New York City subway, offering a listening ear and emotional advice at $2 per five-minute session. On a typical day, he’ll make around $50, which he donates to children who can’t afford school lunches. Read more. 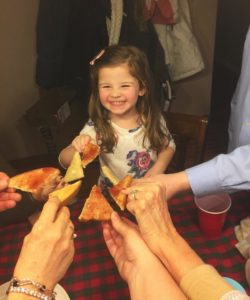 One 3-year-old girl started a new New Year’s Eve tradition for her family that replaced clinking glasses with bread and jam. The little girl was prepped for “toasting to the New Year” by her parents who explained the ritual to her, but she had something a little different than the usual toasting with drinks in mind. When New Year’s Eve dinner was over, she excitedly asked, “Are we going to make toast now?” Toasting with actual toast and many smiles commenced. Read more.

Spending a lot of money on advertising was out of the question for Furkids Animal Rescue and Shelters in Atlanta. Instead, the animal shelter served up a very funny and heartfelt online commercial on their own. The star of the three-minute ad is the brother of one of Furkids’ volunteers and tries to get cats adopted like a used car salesman, waving inflatable tube man and Sarah McLachlan cover included. It works — We want to adopt a cat now! Read more.

Texas man Al Blaschke turned 100 years old last week and celebrated his centennial with a casual birthday skydive. After instructors at Skydive temple in Saledo, Texas, noted what great shape Blaschke was in, they agreed to take him up. Friends and family came in from all over the country to witness his momentous dive. Blaschke’s only complaint? “It was too short!” he said. Read more.