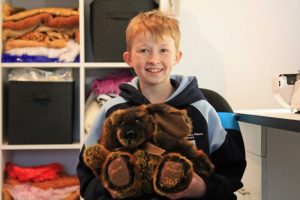 After a video of 12-year-old teddy bear maker Campbell Remess went viral, he became an internet sensation. With more than 30 million views, Campbell is finally getting the spotlight he deserves for his good deeds. For three years now, Campbell has made “comfort bears” nearly every day for sick children in the hospital. While Campbell’s family is making sure that this newfound fame will not overwhelm them, they are choosing to use their new platform to be more productive. The family has set up a website to manage the increasing requests for bears, and supporters can donate materials to Campbell’s initiative. Read more.

The Positive Side of the Election: Women Making Big Moves

Regardless of your political views, everyone can agree the 2016 election was exhausting and, at times, depressing. However, this election saw some important firsts in the political arena. Between the nation’s first Latina senator and the first woman ever elected as California attorney general, America made some positive decisions to promote diversity during this election. Read more.

Jobs for the Homeless – No Strings Attached

Beginning November 1st, the Denver Day Works program began offering paid day shifts to homeless citizens in Denver, Colorado. The workers  simply have to show up and take part in planting trees or plowing snow to receive a starting pay of $12.59/hour. Those who participate in the program will also receive financial planning services free of cost. The city of Denver has set aside $400,000 for the program and aspires to pay 300 people from November 2016 to October 2017, the time period allotted for the program. The city hopes that this program will also lead to full-time employment for some of the participants. Read more.

Toys “R” Us Promotes Stress-Free Shopping for Those with Autism

Toys “R” Us stores in the UK are opening up an hour earlier to cater to children with autism. For many autistic children (and there are over 700,000 in the UK alone), stores can easily be overwhelming with artificial lights, loud announcements, and other distractions that can increase anxiety. By opening up the stores an hour early as a designated “quiet hour” without the distractions of bright lights or loud noises, Toys R Us is helping autistic children experience the fun of a toy shop without distractions that can hinder their enjoyment. Read more.

What You Can Do to Better the Country

If you’re upset with the outcome of the election, or simply upset with the many injustices in the U.S., put your despair into action. Even if you’re not an elected official, there is still work you can do to promote peace and justice across the nation.

Volunteer — By getting involved in the causes that are important to you, you can do your part to make a positive contribution in the world. Consider volunteering to end police violence with Campaign Zero or doing working to end racism with Showing Up For Racial Justice.

Donate — Even small gifts can go a long way. Consider donating to RAINN, the Rape, Abuse & Incest National Network or Friends of the Earth, an international network of environmental groups. Read more.