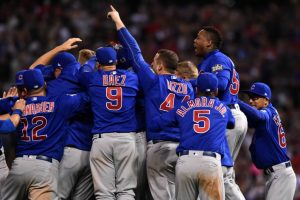 After 108 Years of Waiting, Chicago Cubs Win the World Series

It was a storybook ending for fans who had hoped and prayed to see a Cubs World Series victory in their lifetimes. On Wednesday, November 2, history was made as the Cubs defeated the Cleveland Indians 8-7 in 10 innings during a thrilling game seven. After ending the longest drought in sports history, the Chicago Cubs wanted to say thanks and shared a video called “Today is Our Day,” that highlights the passion of the generations of players and fans who have always believed. Read more.

Born Before Women Could Vote, 102-Year-Old Casts Her Ballot for a Woman

Jerry Emmett was born before the 19th Amendment was passed in 1920 and says she spent her whole life waiting for the opportunity to one day cast her vote for a deserving woman. The Prescott, Arizona, voter cast her ballot early on November 1 and wore a fresh white pantsuit to commemorate the occasion. “I have lived for this day,” Emmett said. Read more.

You’ve probably heard the phrase “music is the universal language,” and thanks to the beauty of science, even those who have lost the ability to move can take part in the symphony. Researchers at Plymouth University and the Royal Hospital for neuro-disability in London teamed up to help physically impaired musicians. With the help of sensory devices strapped to their heads, the paralyzed musicians were able to send brainwaves of short musical phrases to a screen that would allow other musicians to play their selections. It was truly a collaboration of the minds. Read more.

Candy for a Cause

If you find yourself not knowing what to do with your leftover Halloween candy, you might want to consider donating it to troops. It’s a great way to let soldiers know that they are not forgotten, and you can even get a tax deduction for your donation. Operation Gratitude and Soldiers’ Angels are two nonprofit organizations accepting Halloween candy and have already sent thousands of care packages to troops. The organizations accept all types of candy except powdery candy such as Pixy Stix that do not ship well. You can find an Operation Gratitude drop-off or Soldiers’ Angels drop-off near you. Read more.

Starting in December 2017, you will be able to ride the Coradia iLint, the world’s first emissions-free hydrogen-powered train in Germany. While all of the other trains in the nation are fueled by diesel, the Coradia uses a hydrogen fuel cell. As a result, the train only emits steam and is much quieter in comparison to diesel trains. Last month, the transportation company Alstom brought their innovation to the InnoTrans trade fair in Berlin, and Henri Poupart-Lafarge, Alstom’s chairman and CEO, is thrilled with what his company has been able to accomplish. “It shows our ability to work in close collaboration with our customers and develop a train in only two years,” he said. Read more.