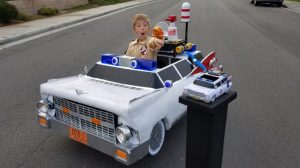 Thanks to his dad, 9-year-old Jeremy Miller hasn’t let being in a wheelchair stop him from dressing up like Batman and Captain America during previous Halloweens. This year, he’s looking to bust some ghosts, and he’s got a swanky new car to show for it. Jeremy’s father Ryan managed to turn his son’s wheelchair into an uncanny version of Ecto-1, the signature vehicle used in the film “Ghostbusters.” Complete with working headlights, taillights, and even a speaker to play the “Ghostbusters” theme song, Jeremey looks more than ready to bust some ghosts this Halloween. Read more.

Dogs Dream About How Much They Love Their Owners, According to Psychologist

Ever wonder what your favorite pet thinks or dreams about? According to Dr. Deirdre Barrett, a clinical and evolutionary psychologist and professor at Harvard Medical School, they’re probably thinking about you. “Humans dream about the same things they’re interested in by day, though more visually and less logically. There’s no reason to think animals are any different. Since dogs are generally extremely attached to their human owners, it’s likely your dog is dreaming of your face, your smell and of pleasing or annoying you.” Read more. 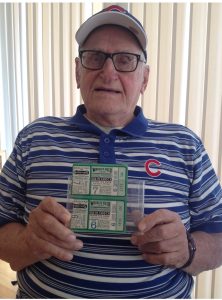 After 71 Years of Waiting, 97-Year-Old Veteran Gets to See the Cubs in the World Series

Jim Schlegel is a 97-year-old Pearl Harbor veteran and Chicago Cubs fan who last attended the World Series in 1945 when the Cubs lost. Schlegel has waited 71 years to see the Cubs get another shot, and he’ll finally get his chance thanks to a GoFundMe page set up by his granddaughter to raise money for tickets. The page also raised the attention of Marcus Lemonis, host of “The Profit.” Lemonis is sending Mr. Schlegel to Game 3 at Wrigley Field with two front-row tickets. The $12,000 dollars raised by the GoFundMe page will be donated to the Purple Heart Foundation to benefit U.S. Military Veterans. Read more.

With the 2016 election just over a week away, most Americans are getting tired of hearing campaign slogans. But Sacramento resident Amanda Blanc created one that anybody can support. After making a lawn sign that says “Make America Kind Again,” Amanda has managed to sell more than 100 signs to people in her community. When asked about why her signs were so popular, Amanda said, “It exemplifies respect. It doesn’t matter what you believe in, and it doesn’t matter what I believe in. We can still all be friends.” Read more.

Toothless Child in Brazil Gets a New Smile

Ryan is a young boy from Brazil who suffered from a disease at age 3 that caused him to lose all of his upper teeth and most of his lower ones. When professional dentist and volunteer Amanda Mattos met Ryan during a social project in Brazil, he told her that his one wish was to have teeth just like all of his friends. So, with her own supplies, Mattos fulfilled Ryan’s wish and gave him a strong smile to be proud of. But Ryan isn’t the only one walking away smiling. “This was the most rewarding dental work I ever did,” Mattos said. Read more.