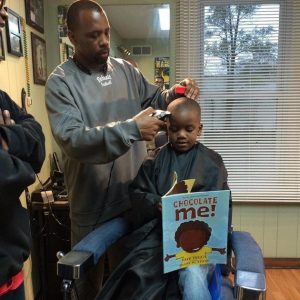 Sometimes it can be a struggle to get kids to sit down with a book, but The Fuller Cut barber shop in Ypsilanti, Michigan, took a creative approach. The barber shop offers $2 discounts on haircuts to kids who read aloud while getting their hair done. The shop, which has a diverse clientele, is intentional about offering a selection of books that have positive images of African-American communities. Ryan Griffin, the barber who started the program, says he hopes he can encourage kids to love words. “If we can get kids to come back to the Fuller Cut as adults in college and they tell us, ‘Because you guys had us read here, it made me want to be a writer or journalist,’ that’s really the end goal.” Read more.

Boy Brings Extra Lunch for Kid Who Can’t Afford One

Early into this school year, Dylan Duran began asking his mom to pack him two lunches. Dylan’s mother assumed that her son was just a hungry growing boy, but what Dylan revealed broke her heart. Every day Dylan saw a boy at school with nothing more than a single fruit cup because his mother could not afford to pay for his lunch. Not only did Dylan’s mom send him to school each day with an extra lunch, but the school volleyball team raised $200 to pay off all past due accounts for the kids without lunches, ensuring that everyone can have something to eat. Read more.

Baby Elephant Hurries to Save Her Favorite Human

What do you do when your friend is in danger? You come to their rescue. No one knows this better than Kham Lha, a baby elephant living in Thailand under the care of the Save Elephant Foundation. When co-founder Darrick Thompson appeared to be drowning and called out to Kham Lha for help, she quickly came to his rescue and even offered her trunk for him to hold onto. Thompson wasn’t actually in danger, but staging a training exercise to see how Kham Lha would respond in the event of an emergency. This exercise goes well with the foundation’s message: “We believe that if we treat animals with love, the animal will pay us back with love too.” Read more.

For comic book lovers of color, representation matters when it comes to truly identifying with the characters they idolize in stories. 25-year-old black college student Charles Conley exemplified this when he attended the comic book convention Dragon Con dressed as Batman. While walking around, he encountered a young black boy who was astonished that a superhero could look just like him. Filled with pride, Conley broke his number one superhero rule, and removed his cowl to proclaim, “You can be any superhero you want to be and don’t let anyone tell you different.” Read more.

James Lapeze was always hoping for luck, playing the lottery every week at his local grocery store. However, he wasn’t so lucky during the massive flooding this August. His house was severely damaged, along with roughly 40,000 other homeowners in Louisiana, and 72-year-old Lapeze didn’t know what to do. But, his problems were solved when he heard his $1 million Powerball lottery numbers announced in the beginning of October. After taxes, James and his wife will collect $700,000, and James plans to use the money to pay for his home and retire. In James Lapeze’s search for luck, he found a fortune. Read more.