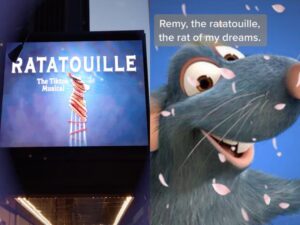 Cooking Up a Ratatouille Musical

For months, the sensation which is “Ratatouille: The Musical” has enthralled social media users (including one of our very own editors) on TikTok. Since August, with the conception of Emily Jacobson’s original “Ode to Remy,” a slew of creatives have eagerly collaborated on producing a live rendition of the musical. The social media network served as an amplifier for the musical, and the adaptation is now backed by Seaview Productions and has garnered the talents of singers, choreographers, designers, and others who discovered the TikTok phenomenon after composer Daniel Mertzlufft’s arrangement of “Remy the Ratatouille” went viral. Proceeds from the show will go to The Actors Fund. To learn more about “Ratatouille: The Musical,” check out Ratatousical.com. For the full story, click here. 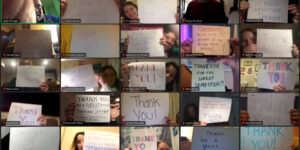 A Reason to Turn Your Zoom Camera On

This year has been very tough for students and educators. Many have been forced to make the most of remote learning, and as the months go on, engagement wanes. On December 2, when statistics professor Adam Shrager logged in to Zoom for his last day of class for the semester, he was surprised to see all black screens and was pretty upset. To his surprise, the students all turned their screens on, but instead of just their faces, they were holding thank you signs and cards sharing their appreciation for the hard work of their professor. The professor was moved to tears. And it didn’t stop there! Because the original TikTok video of the event went viral, other students at other schools decided to join in on the thanking as well. Here’s to all the professors that made this semester the best they could! Read more. 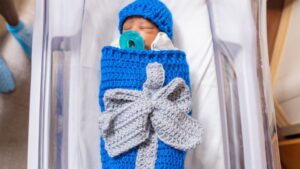 While 2020 has been a stressful year, there are still many things we can be grateful for…like babies! The UPMC Magee Hospital in Pittsburgh knows that new life is one of the best gifts to come out of 2020. So, when the hospital’s newborns are ready to be taken home, they knit them a blanket that looks like a present. Nurse Caitlin, who’s responsible for knitting the present outfits, said it takes about two to four hours to make one, and they have new babies every day! Shoutout to the healthcare workers at this hospital, and all hospitals across the country, helping during this difficult time. Read more. 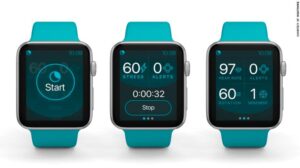 In 2015, Tyler Skluzacek, son of combat vet Patrick Skluzaceksaw, set out to help his father who experienced recurring debilitating nightmares as a result of his PTSD. When Tyler was a senior at Macalester College, he entered a collaborative computer programming “hackathon” that focused on developing apps to help people. Tyler and his team came up with the prototype for the “anti-night-terror” smartwatch app. The app detects oncoming sleeping disturbances by measuring the wearer’s heart rate and movement. So, before the nightmare can happen, the app delivers a subtle disruption to reset the wearer’s sleep pattern. The technology is inspired by PTSD service animals that lick or nudge their owners during their sleep when their heart rate rises. Now after five years of testing and tweaking, the app is going to be available for PTSD sufferers everywhere. Read more. 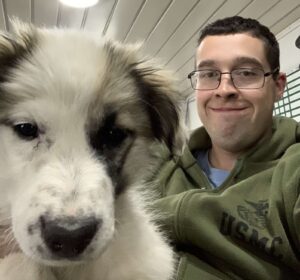 Puppies can really brighten up a room. That’s exactly what Marshmallow did for the servicemen at a U.S. military base in the Eastern European country of Georgia when the pandemic forced them to stay on base. She and other strays were comforting companions for the military personnel isolating in place. Marshmallow’s story began when she was spotted meandering outside the base. After someone noticed the loitering pup, Patrick Brady, 22, went out and found her — a mass of fur no bigger than his boots. They hit it off right away. He loves her, and so many other service members have come to feel the same. However, due to the repercussions of COVID-19, the plan to bring Marshmallow back to Brady’s home in Long Island, NY became all the more difficult. After reaching out to SPCA International, Brady got help through their Operation Baghdad Pups: Worldwide, an endeavor that assists American service members around the globe in bringing animal pals back home. Read more.