Teacher of the Year with a Life-Changing Lesson 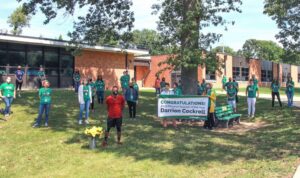 Darrion Crockell, a 34-year-old elementary school physical education teacher, was thrilled to be named Missouri’s 2021 Teacher of the Year — a stark contrast to his former life as a young gang member. After growing up in a broken home, joining a gang, and almost being moved from foster care to a boarding school for troubled youth, Crockell’s teachers stepped forward to fight for him in court and were able to ensure his stay in local foster care. Eventually, Darrion’s football coach took him into his care in the seventh grade. Crockell went off to college, earning a degree from the University of Missouri-St. Louis, and is happily married with a 3-year-old son. Now in his sixth year of teaching full-time at Crestwood Elementary School, Crockell has created fitness opportunities for his whole community, with after-school exercise programs for adults and a basketball program for local fathers — inspiring others all along the way. Read more about Darrion’s incredible story. Read more.

How a Cancelled Wedding Catered Thanksgiving Dinner for 200

When the pandemic forced Emily Bugg and Billy Lewis to scale down their wedding guest list, then postpone their wedding date, and finally cancel the event altogether, the couple decided to turn their misfortune into a Thanksgiving feast for 200 psychiatric patients in need. The couple repurposed their $5,000 nonrefundable deposit to Chicago’s Big Delicious Planet catering company by partnering with Thresholds, a nonprofit organization that assists psychiatric patients suffering from Schizophrenia and other mental illnesses. Just before the Thanksgiving holiday, Thresholds received 200 meals of turkey, vegetables, and more from the catering company, all of which went to feed those living with mental illness in Chicago. Although the couple’s wedding was much humbler than expected with a small ceremony at Chicago’s city hall, Bugg and Lewis were thrilled to begin their married life together with such a meaningful act of selflessness. Read more.

A Kick for the History Books

On Saturday November 28, Sarah Fuller made history as the first female to play a snap in a Power Five College Football game. Sarah, originally a goalkeeper for Vanderbilt’s SEC Champion women’s soccer team, joined the football team after many members were ineligible to play due to COVID-19. She kicked off to start the second half against Missouri with a squib kick. In a post-game interview, Sarah said “I just want to tell all the girls out there that you can do anything you set your mind to. You really can. If you have that mentality all the way through, you can do big things.” Read more.

Khakis for a Cause 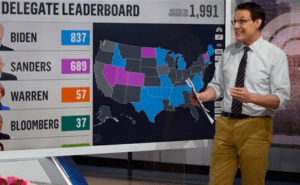 NBC News and MSNBC national political correspondent Steve Kornacki guided his viewers through a grueling election season with his electoral map coverage, but notably, he did so quite stylishly. Kornacki’s signature brown khakis became a national hit over the course of Election Day and the days that followed. Amazingly, Gap saw a 90% increase in khaki sales in just one day following the commentator’s broadcasts. Inspired by the phenomenon, Gap pledged to donate 500 pairs of the now-famous “Kornacki khakis” to the Boys & Girls Clubs of America’s Workforce Readiness Program, an organization that prepares high school graduates for the workforce. Read more.

Meet the Restaurant Owner Who Puts Charity Before Profit

Sakina Halal Grill, an eatery in Washington, D.C., has dedicated itself to more than just good customer service. Under the guidance of its owner Kazi Mannan, the restaurant has been giving free food to the homeless people of the area since it first opened in 2013. Mannan says giving in this way is something that brings him joy. Raised in Pakistan, Mannan developed the knack for cooking from his mother from an early age. It was also his mother who inspired his spirit of generosity. When the pandemic devastated many businesses, including his own, he had to cease giving away food to those who couldn’t pay. But after making a GoFundMe page, Mannan witnessed the generosity of donors all over the world, whose funds were put to good use in offering free meals amid the pandemic. Read more.