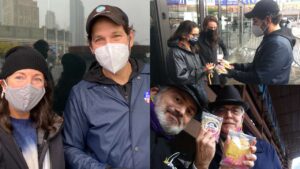 Paul to the Polls: A Surprise Delivery From Ant-Man

From “Ant-Man” to … cookie deliverer? Actor Paul Rudd is known for his long list of Hollywood films, however this week, he hit the streets of Brooklyn, New York taking on a new role. Rudd handed out individually-wrapped blueberry and cream cookies to New York City voters as they waited in the rain outside the Barclays Center to cast their ballots. Many of the voters took to Twitter to share their eventful day of doing their civic duty and being hand-delivered a cookie from the Hollywood star. Read more. 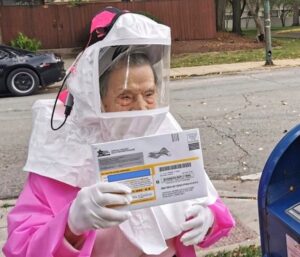 Voting is a privilege and a duty. Just ask some of this year’s older participants at the polls; they’re only over a 100 years old! Determined American seniors have gone to great lengths to ensure that they cast their vote this year, despite the looming health threat of the pandemic. Instead, some have developed ingenious mechanisms for coping with the potential hazards of COVID-19, like Beatrice Lumpkin, 102, whose grandson built a special hazmat suit for her. And still others refused to let the pandemic have a negative effect on them. They sent in absentee ballots or masked up and went to vote in person. Some have struggled with arthritis or weaker immune systems, but that doesn’t stop them. Take a look at 10 amazing seniors who serve as an inspiration to their local communities across America. Read more. 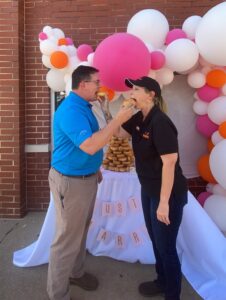 Sugar Good was working an ordinary shift at her Oklahoma Dunkin’ Donuts one day when John Thompson pulled up to her drive-through window. Five years later, the couple tied the knot right where they first met. As strangers, Good memorized Thompson’s usual morning order and was struck by his charming smile, while Thompson, unaware of Good’s interest in him, likewise looked forward to their brief meeting before he headed off to work each morning. The two eventually exchanged phone numbers and, after four years of growing together, decided that their beloved Dunkin’ Donuts would be the perfect place to hold their wedding. Customers who visited the restaurant on the day of their wedding were all treated to a free donut in celebration of the special love between the “coffee girl” and the “guy in the red truck.” Read more.

Japan takes its Halloween celebrations just as seriously as the U.S. But there’s a growing Japanese practice that rivals the worn-out Western conception of Halloween costumes. Instead of donning the ghoulish personas that frequent the eves of many an American Halloween, some Japanese partygoers were seen dressing up like random individuals caught in the “mundane” but often amusing mishaps of everyday life. One includes the portrayal of a man who isn’t aware his phone flashlight is on. Another portrays a “person going to work on a windy day” in which a man is made up so that it appears his tie and name tag are being thrust aside by the wind. Read the full story and see the delightful photos here.

A Puppy Selfie a Day Keeps the Doctor Away

Jason “Jay” Hardesty isn’t your average UPS driver. Besides delivering packages in the New Orleans area, he also snaps selfies with any dogs he meets along the way. He began posting these selfies about two years ago with the hashtag, #pupsofjay, but never expected to be noticed. Now his account has around 100k followers and gets thousands of likes. Jay has become a local celebrity on his normal delivery route, with dog-owners asking the delivery man to take pics with their pups! He even has some longtime best furry friends like Mac, a golden retriever who he has been friends with for three years. Jay’s goal with all this is to simply bring a smile to people’s faces. Read more.