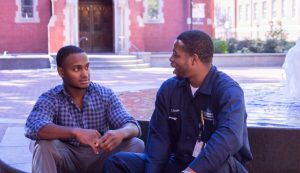 Unsung Heroes: Getting to Know the Stories of “Invisible” Workers

As a janitor at Georgetown University, Oneil Batchelor felt invisible, going about his day as students maneuvered around him. It took one hello from business student Febin Bellamy for that to change. After Bellamy got to know Batchelor, an immigrant from Jamaica with entrepreneurial dreams similar to his own, he began to wonder about the stories of other employees at the school – the minimum-wage cafeteria workers, the locker room attendant, the maintenance man… so he started “Unsung Heroes,” a Facebook page profiling the workers around campus, helping the students get to know and understand the lives of those who keep the university functioning every day. Read more.

Most people waiting for the train go straight to their phones to kill time. In Grenoble, France, they read short stories. Thanks to publishing company Short Édition and mayor Éric Piolle of Grenoble, short-story vending machines are being installed in major train stations throughout the city. Each machine gives the option for a 1-minute, 3-minute, or 5-minute tale, from a range of genres, and all for free. Thankfully, we’re catching on over on this side of the Atlantic too, as mini-libraries and book lending machines are appearing in Toronto, Indiana, and other locations. Read more.

Over the past week, hundreds of residents along the Southeast Coast of U.S. have been forced to evacuate their homes to escape the destruction of Hurricane Matthew. Airbnb’s disaster response team wasn’t going to leave these displaced people hanging. In North Carolina, South Carolina, Georgia, and Florida, Airbnb hosts have volunteered to rent out their homes for free until it is safe for these residents to return home. Airbnb’s disaster response program began in 2012 after Hurricane Sandy, and has since spread throughout the world, aiming to do its part in times of attack or natural disaster by offering free, safe housing. Read more.

6 Efforts Improving the Sustainability of the Earth

Over the past two years, an international group of researchers have analyzed one hundred projects submitted for their website, Good Anthropocene. Their primary objective is to identify examples of communities’ positive initiatives to make the world more sustainable. From Green Urbanism (like NYC’s High Line) to Agroecoloy (using ecological approaches to enhance food-producing landscapes), these researchers are confident that the future of our environment is significantly improving. Visit their website for a more comprehensive list of these efforts. Read more.

Cop Who Saved 2-Month-Old Girl Asked to be Godfather

When Georgia police officer Kenneth Knox responded to a 911 call for a 2-month-old girl choking on her food, he had no idea how much that experience would change his life and hers. After panicked efforts by the baby’s parents to perform CPR failed, Officer Knox arrived and miraculously saved her life with a reverse CPR maneuver. In a Facebook post he later wrote, he stated that after 25 years as an officer, this was his proudest accomplishment. The grateful family asked Knox to be the child’s godfather, an offer he gladly accepted. Read more.