Professors Emmanuelle Charpentier and Jennifer Doudna made history this year by being the first two women to win the Nobel Prize in chemistry in the same year. Their award-winning genetic engineering breakthrough will allow scientists to cut and edit an organism’s genes with incredible precision — a feat with huge implications for innovative crops and even life-saving medical procedures to come. The two female scientists have raised the number of women who have won this extraordinary distinction from five to seven. Because of the work of these two brilliant women, the cure for heritable diseases may be just around the corner. Read more. 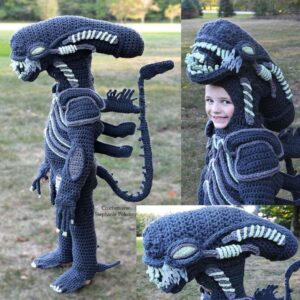 Mom Takes Handmade Halloween to the Next Level

It’s not often you get a homemade Halloween costume from mom that’s crocheted from head to toe. Stephanie Pokorny of Ohio did just that for not one, but two sons, ages 4 and 7. She created intricately detailed characters like Predator, Papa Smurf, and ET. Stephanie says she completes the annual projects in September so she can relax and enjoy Halloween with her kids in October. She says it takes about 50 hours spread over two weeks to complete. She also adds glow-in-the-dark paint. Now that’s dedication! Read more. 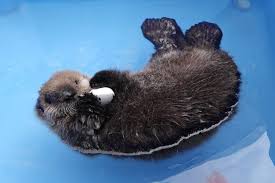 Meet Joey, a 3-month old male sea otter orphan. He was rescued off the Canadian coast of Kyuquot and now resides at the Vancouver Aquarium Ocean Wise Marine Mammal Rescue. Now, Joey has a new calling: He is a Youtube sensation with thousands of viewers from all across the globe following his daily routine. Highlights have included the video “Wiggle Wiggle Jump” where Joey tries to make a run for it while he is with the vet. (It now has more than 509,000 views. Plus one more because we’re about to watch it again) Joey is currently living the celeb life, complete with his own 24-hour employee presence, and his daily routine includes getting groomed, playing with toys, eating, swimming in a kiddie pool and learning to dive! Thanks to Joey, the Vancouver Aquarium, which runs by donation, has received financial contributions from over 30 countries. Read more. 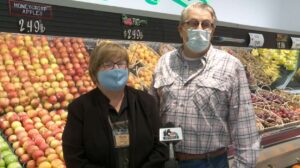 Becky and Ed Osowski were just teenagers when they began working at Martin’s Super Markets in Mishawaka, Indiana in 1970 and 1969, respectively. The supermarket sweethearts began dating, and found themselves happily married just five years later. After a combined 100 years of employment at their hometown grocery store, the hardworking couple has decided to close this chapter of their lives and begin the next with their retirement. The Osowskis now happily look back on their many years of working together, the countless customers and coworkers who have become dear friends, and the legacy that their children and grandchildren now carry on through their own employment at Martin’s Super Markets. Read more. 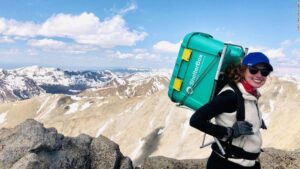 Climbing for a Cause

Twenty-seven-year-old hiking fanatic Brittney Woodrum reached new heights, literally, when she decided to put her hiking boots to the test in order to raise money and awareness for COVID-19 relief. Woodrum partnered with ShelterBox, an organization that provides emergency relief for families around the world free of charge, which sponsored her climb to the top of Colorado’s 58 peaks, each standing at about 14,000 feet. While she only expected to raise $5,000 for those in need of financial support, Woodrum was blown away when her donations climbed to an impressive $85,000 over the course of her 78 days of hiking. She carried ShelterBox’s signature bluish-green supply box along each course and snapped fantastic pictures along the way. Read more.