To the Rescue, Baby Yoda Is

Who doesn’t find comfort in the adorable Baby Yoda? Five-year-old Carter was no different. When he and his grandma walked into the toy store and saw the Baby Yoda doll, he knew he had to get it. But he didn’t want it for himself. Instead, Carter took the toy to the firefighter drive in Scappoose, Oregon. Carter believed Baby Yoda would bring comfort to the firefighters, who are busy at work fighting the Oregon forest fires. Plus, in the Mandalorian, Baby Yoda uses his powers to control fire. Thanks to Carter, the firefighter crews at Holiday Farm are passing around Baby Yoda and enjoying his comfort. You can even follow his journey at the Baby Yoda Fights Fires Facebook page. Read more. 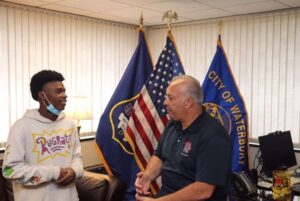 In Waterbury, Connecticut, a teenager named Gavin couldn’t help but notice the vehicle that speeded past him — on fire. Along with a group of others, Gavin watched as the flaming car eventually came to a stop. Even though the notion that the car might blow up at any moment entered his head, Gavin wasn’t willing to sit by and watch the people inside get hurt. Rushing to the scene, Gavin asked the 9-year-old girl inside to help get her younger siblings, ages 1 and 4, out of the vehicle. After that, he helped their mother escape. It is believed that the source of the combustion was an electrical failure. The Waterbury Police Department honored Gavin for his heroic and selfless act. Read more.

Community Fridges Supply Food to Those in Need

From Brooklyn to New Orleans, community refrigerators are popping up across the U.S. in various locales to provide people with simple nutritional staples. Food insecurity has increased following the laying off of millions of Americans earlier this year, but the goodwill of fellow community members has resulted in a proactive response to the food crisis. Charities are helping by offering food to the less fortunate. One such charity organization is New Orleans Community Fridges, which has used the talent of artists like Sydney Calderon to make their fridges really stand out. Read more. 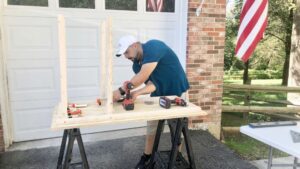 With students adjusting to virtual learning, there is a much higher need for at-home supplies like desks, chairs, solid wifi, and computers. Recognizing this need, Desks by Dads was born. Jessica and Al Berrellez from Maryland realized that a lot of students in their town didn’t even have a desk to learn from at home. After watching some YouTube tutorials, Al was able to build a prototype for a simple desk in about an hour. After that, the couple shared the blueprint design on Facebook, and the rest was history. Friends and other local dads began building desks too, constructing two dozen desks just for the students in their Maryland town. While the parents of three and full-time workers have decided to continue their project locally, thanks to the help of Facebook, their project will help students across the country. Read more.

Heavenly Sounds in a Parking Garage 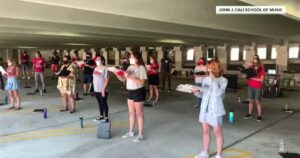 Who knew the solution to holding a socially distanced choir practice involved a parking garage? Music students at Montclair State University needed a place to practice their music that safely fit their large group. So, they headed to the school’s parking garage. In what is now a viral video, the students beautifully sing “Hallelujah,” all wearing masks and staying socially distant. The acoustics are surprisingly good — they sound perfect, even with masks on. Check out the awesome video of their practice here.