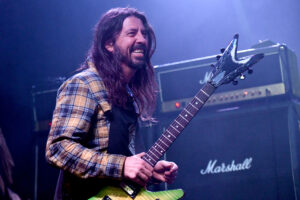 Facing Off With a Foo Fighter

After challenging Foo Fighters frontman Dave Grohl to an epic internet drum battle, 10-year-old Nandi Bushell got a special surprise when the rock ‘n’ roll legend performed an original theme song just for her on the band’s official Twitter page. Nandi Bushell showcases her drumming skills in videos on her popular Youtube channel, where she first challenged Grohl to a music battle during her incredible rendition of the Foo Fighters’ hit single, “Everlong.” In round two of the standoff, Grohl delivered an off-the-cuff theme song in honor of Nandi, even recruiting his own daughters (“the Grohlettes”) to sing backup vocals. Watch these great performances here. 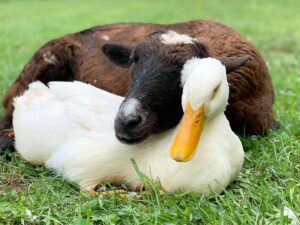 Leanne Lauricella is the founder and president of Goats of Anarchy (GOA), a farm animal rescue and rehabilitation sanctuary in Hampton, New Jersey. Since starting the nonprofit six years ago, she’s witnessed many adorable activities, but never anything quite like this. Gigi, a 7-month-old lamb, has been living with GOA’s blind goat herd and “acts as a mom to some of them.” But recently, Gigi has redirected her nurturing spirit to a new animal in the sanctuary in need of a little extra love: Merlin the disabled duck. Merlin has an injured leg, and despite various treatments and prosthesis, is unable to walk. Gigi began stopping by Merlin’s sunbathing spot to cuddle him. Gigi returns to the spot each and every day to snuggle her BFF Merlin while he lay. According to Lauricella, interspecies friendships on the farm are rare since the animals at GOA are often separated by species for their care. Read the full story about their friendship with adorable photos here. 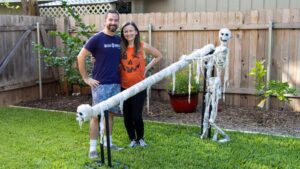 As fall is approaching, so is the spooky season. However, Halloween may look a little bit different this year. Concerned with following pandemic guidelines, an Austin, Texas couple thought of a genius way to celebrate Halloween both safely and germ-free. Introducing the Candy Slide, a DIY project that allows people to continue the tradition of handing out candy to trick-or-treaters by sliding treats down a decorative tube from a safe distance. Known as the “Wicked Makers” on YouTube, the clever couple created a DIY video that shows how to construct the candy slide in only 10 minutes. With over 200,000 views already, people are thanking the duo for “saving” Halloween! Read more. 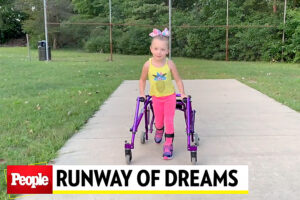 Fashion week always brings out innovative style, and amidst a global pandemic, designers are getting as creative — and inclusive — as possible. This year, The Runway of Dreams Foundation held a dynamic show featuring models with varying bodies and abilities. They modeled the new adaptive clothing lines from designers like Tommy Hilfiger, and stores like Target and Kohl’s. Some of the models included Paralympic gold medalist Brenna Huckaby and author and disability rights activist Keah Brown. Tommy Hilfiger made history as the first big-name designer to make an adaptive clothing line for people of all ages. Hilfiger and Runway of Dreams CEO Mindy Scheier felt this cause hit close to home, as they both have family members who have grown up with disabilities. Scheier hopes this runway that made history will continue to inspire great fashion for all. Read more. 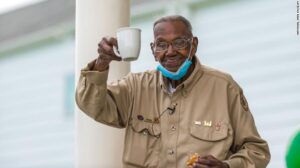 Lawrence Brooks has seen a lot of change in his day. He served his country in the 91st Engineer Battalion, comprised mainly of fellow African-American troops. Brooks experienced enemy fire firsthand and got to travel to various locales as the battalion was stationed at New Guinea and later in the Philippines. Now, as he celebrates his  111th birthday, Brooks was honored with a socially distanced celebration orchestrated by the National WWII Museum. The museum had hoped to receive only a few hundred well-wishing birthday cards for Brooks. Instead, they received nearly 10,000. Read more.