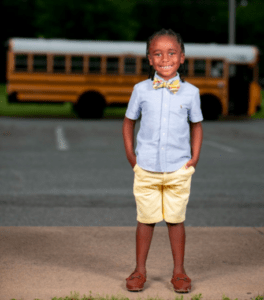 Right now, for all ages, school is looking a little bit different. First-grader Bryce Latimer wanted to do something special since his class would be learning virtually. With the help of his parents, Bryce created a “learn from home corner” decked out with the best school supplies and posters. His station includes library books, a desk, computer, and his Zoom schedule. At first glance, it looks just like a first-grade classroom! Bryce said his setup has made virtual learning easier, and he looks forward to math, and the alphabet. Read more.

‘Paving’ the Way to a Greener Future

The U.S.’ large amounts of plastic waste usually end up in one of two places: a landfill or in the middle of the Pacific Ocean. However, California’s Department of Transportation (Caltrans) has a new sustainable use for our discarded plastic. TechniSoil, a sustainable landscaping company, has partnered with Caltrans officials to pave a one-mile stretch of a three-lane road with recycled plastic. According to TechniSoil, the recycled material is two to three times more resilient and durable than asphalt pavement, and generates 90 percent less greenhouse gas emissions. This mile gave more than 150,000 single-use plastic bottles a new purpose — and it’s only the start. Read more.

Make It Work: Designer Uses Fashion to Help Her Tribe

For many people, the words “fashion” and “pandemic” don’t really go together (no disrespect to the work-from-home sweatpants). However, Amy Yeung, fashion designer and business owner, tapped into the skills she learned from the fashion industry to help her Navajo community in a crisis. When COVID-19 started hitting Navajo nation, she founded the Dził Asdzáán (which translates to “Mountain Woman”) Command Center, where she and other matriarchs of the tribe distributed PPE and food, and helped those in need find shelter. Yeung and her team also began sewing masks for civilians to wear out of fabric that would’ve otherwise been wasted, sourced from her connections from the fashion industry. Want to help? You can donate to the group on her website. Read more.

Cartoons With a Cause

On Tuesday September 1t, the traditional Google logo was replaced by a comic-strip doodle created to honor Jackie Ormes, the first African-American woman cartoonist, known for her panel cartoon “Patty-Jo ‘n’ Ginger.” Her comic first debuted September 1, 1945 in the Pittsburgh Courier. She is known for spreading positive depictions of African-American women and girls in the media, and even developing dolls based on her cartoon characters. After she retired, she remained an advocate and leader for African-American women. Read more.

Shirley Curry isn’t your typical 84-year-old. In her golden years, she’s developed quite the following for her dedication to online gaming and YouTube walkthroughs of “The Elder Scrolls V: Skyrim.” Every day, she settles in at her computer to guide her 900,000+ subscribers (known to Curry as her “grandkids”) through obstacles and features in the game. She’s become a fixture in the gaming world, so much so that supporters set up a GoFundMe to send Curry to the annual PAX East gaming convention in Boston, where she met many of her adoring fans. Curry admits that she’s surprised by the attention. “When people say things like, ‘You’re a legend!’ it embarrasses me. Because I’m just a newbie old grandma,” she says. Read more.