The NBA Hopes to Make Change With Its Comeback 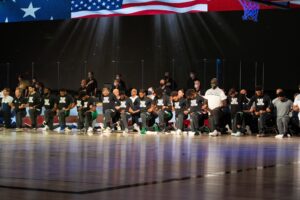 The return of the NBA season was an opportunity for many basketball players to express their sentiments about the current racial justice movement in today’s world. With the country still reeling from the tragic deaths of George Floyd, Breonna Taylor, and other Black Americans, the NBA allowed its players to choose slogans to wear on the backs of their jerseys from a pre-approved list, with the phrases “Black Lives Matter” and “Equality” among the most popular. Several players hailing from countries outside the U.S. elected to sport slogans in their native languages to show the universality of the justice movement. Read more.

When one concerned citizen called for help after seeing a mother duck pacing around a storm drain, Fire Rescue Engine 83 from Florida’s Brevard County came quickly to the aid of a few clumsy ducklings who fell through the grates. The rescue team removed the grates and managed to scoop all seven ducklings up safely just days before Tropical Storm Isaias rolled in with heavy winds and rainfall. The heroes of the fire department shared pictures of the rescue, reassuring onlookers that “the momma duck won’t get the bill.” Read more.

Returning to school safely during the Coronavirus pandemic is a concern for students and teachers alike, but one Alabama principal decided to lighten the situation with a fun, educational twist on MC Hammer’s rap song, “U Can’t Touch This.” Dr. Quentin Lee of Childersburg High School remixed the 1990 hit with lyrics about how students can protect their health and the health of others while back on campus. With the help of film director Jalen Mitchell, Dr. Lee produced the hilarious video featuring a Hammer dance, commentary on sanitary practices, and more. He was even  recognized on Twitter by the legendary MC Hammer himself. Watch here. 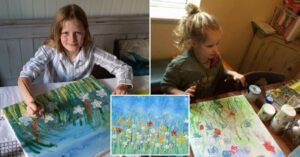 Daisy Watt picked up a paintbrush for the first time just four years ago when she decided to paint her grandparents a picture to cheer them up after they were diagnosed with cancer. It was immediately evident that the 6-year-old had natural talent when it came to painting. Daisy’s mom, Karen, displayed her daughter’s painting in a local gallery to be auctioned off for cancer charities. “It sold for £9,500 and was so popular [that] 100 special edition prints were commissioned and snapped up by buyers from the likes of Canada and Hong Kong.” Daisy, now 10, has earned £50,000 through her artwork since that auction — all of which she has donated to charity. Read more.

It’s Never Too Late to Graduate

After surviving World War II and the bulk of the coronavirus pandemic, 96-year-old Giuseppe Paterno conquered his latest challenge this past week: graduating from university. Having received minimal education as a poor boy in Sicily, Paterno enlisted in the navy during the Second World War and became a railway worker upon his return home. In 2017,, inspired by his love for reading, he decided to finally pursue a three-year degree in History and Philosophy at the University of Palermo. Paterno’s unwavering dedication to his studies resulted in his graduating at the top of his class with highest honors. Read more.