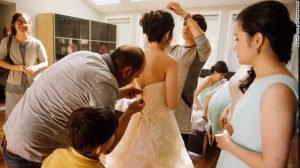 When Ontario bride Jo Du was getting ready for her big day, the zipper of her dress snapped off, leaving the worried bride unsure of how she would wear her wedding gown. Members of the wedding party raced to a neighbor’s house to locate a pair of pliers. To their surprise, their neighbor had recently taken in a family of Syrian refugees, and the father of the family, Ibrahim Halil Dudu, was a tailor. With the help of a translation app, Halil Dudu stitched up the back of the bride’s dress in front of grateful friends and family, making the wedding day truly a day to remember. Read more.

When One Team Loses a Brother, Another Team Lends a Hand

Over the weekend, the Florida Marlins tragically lost their 24-year-old pitcher Jose Fernandez in a boating accident. In the midst of mourning the loss of their fallen brother, The Marlins have received condolences from teams all over the entire league. The Atlanta Braves took the show of solidarity one step further after Sunday’s game was canceled in Miami, donating their team buses so the Marlins’ players and coaches could travel to the Fernandez family home and support their teammate’s loved ones during their time of loss. Read more.

No Size Fits All – A Step Towards Body Positivity

People come in all shapes and sizes, and a hashtag campaign started by the U.K.-based Women’s Equality Party aims to encourage women across the globe to embrace their body diversity by posting a photo of themselves and their clothing size with the hashtag #NoSizeFitsAll. After noting that 70% of U.K. women cut out the labels on their clothing out of embarrassment, journalist Catherine Mayer and broadcaster and author Sandi Toksvig launched the social media campaign during London Fashion Week as a way to subdue what they call “the trend of label shame” and help women realize they’re not defined by their dress size. Read more.

When Mark Ross found out that his younger sister had been killed in a car accident, he immediately began the drive of more than 100 miles home to Detroit to be with his family. When he was pulled over for speeding on the way to Michigan, Ross thought he was going to jail, especially with an outstanding petty warrant in his home county. But when Sgt. David Robison heard Ross’ story, everything changed. Robison called the Wayne County police department to pick up Ross, but they said it was too far of a drive, so Robison drove Ross the next 100 miles himself. Robison prayed with the Ross family, and has confirmed that he will also be attending the funeral. Read more.

Pianos For Peace, a two-week outdoor art exhibit in Atlanta, Georgia, features 29 ornately decorated pianos around the city for people to play at their leisure. Malek Jandali, a Syrian-American concert, pianist founded Pianos For Peace with the aim of using music to create peaceful environments. After the two-week installation wrapped up, the instruments were donated to local schools, hospitals, and nursing homes. Pianos For Peace volunteers hope that the presence of these pianos will make the arts readily available to more people. The organization writes, “Music unites people and by actively involving people in music, together we can make for a more peaceful community.” Read more.