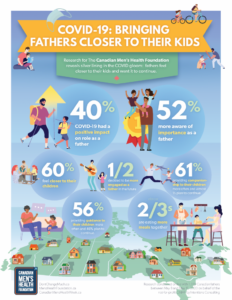 Making a Difference … One Yard at a Time

This 11-year-old is proving that you are never too young to make a change. When Jack Powers saw the Black Lives Matter protests happening on the news, he knew he wanted to get involved. He saw the way that Black Americans were being treated and wanted to be part of the solution. So, Jack started offering to mow his neighbors’ lawns. But instead of putting the money he earned into his own pocket, he is donating all of his earnings to Black Lives Matter. While you might not live close enough to Jack to have him mow your lawn, you can donate to Jack by emailing him at JackForBLM@gmail.com. Read more.

Fatherly Bonding: WFH Has Changed Fathers’ Relationships With Their Kids

A new study by the Canadian Men’s Health Foundation (CMHF) surveyed more than 1,000 Canadian fathers and found that fathers feel closer to their children since quarantine began. The foundation conducted the survey in May and released the results just in time for Father’s Day this past weekend. They found that dads have seen positive changes in their relationships with their children since spending more time at home. “During lockdown, 40% of the respondents felt COVID-19 has had a positive impact on their role as a father, 52% are more aware of their importance as a father, and 60% felt closer to their children.” For fathers who usually spend their days commuting and working outside the home, quarantine has provided valuable time with their children. Read more. 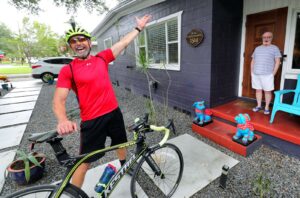 While on a morning bike ride, cyclist Billy Flanigan decided to spread some cheer to a friend in isolation with a socially distant visit. After seeing how happy the visit made his friend, Billy decided to continue spreading joy. The avid cyclist soon found himself pedaling over 3,000 miles to bring smiles to his friends’ faces across the country. A longtime Walt Disney World performer, he entertains his friend with “Flanigrams,” during which he performs a song and choreographed dance from some of Disney’s famous musicals. In a show of their appreciation, Billy’s friends turned the tables to give him a well-deserved birthday surprise. Read more. 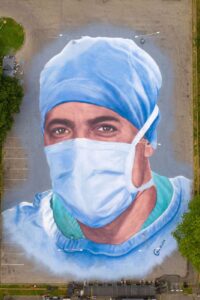 Artist Jorge Rodrigues-Gerada created a massive mural to honor the healthcare workers who have sacrificed so much during the pandemic. The mural is 27,000 square feet, and located in the Queens Museum parking lot. The design features the face of a health care worker in scrubs and a mask. The artist titled the work “Somos La Luz,” which when translated to English from Spanish means “We Are The Light.” The mural was commissioned by a healthcare network comprised mostly of doctors who had immigrated from Latin America and China to the U.S. and now treat patients from marginalized communities. Overall, with volunteers, the project took a week to finish. Check out the mural and read more here. 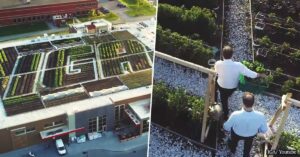 Canadian grocer IGA brings the term “organic” produce to a whole new level. They have introduced a 25,000 square foot rooftop garden with over 35 types of produce. The grocery store can now sell organic products grown on the roof of their store. Some of the crops include kale, lettuce, eggplant, and tomatoes. They even have beehives for honey! Not only that, but the shape of the garden spells out the store’s name: IGA. It’s a win for the IGA shoppers and for the environment! Read more.