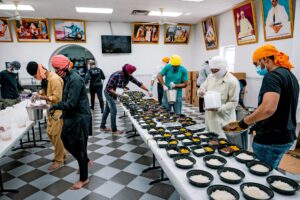 One tenet of the Sikh religion, seva, also known as “selfless service,” is becoming incredibly helpful during times of pandemic and protesting. Through the act of seva, many gurdwaras, or places of worship for Sikhs, provide hot meals for those in need. This is most famously done at the Golden Temple in Amritsar, India. There, they feed more than 100,000 people every single day. Closer to home, a group of about 30 cooks in Queens Village has made 145,000 free meals in just the last 10 weeks. This has been done by not only serving meals at their gurdwara, but also through the incredible act of meeting hungry protesters where they are. Read more. 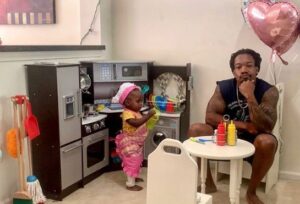 Ava’s Kitchen: A Hilarious Restaurant Review With a Powerful Message

Christopher Kyle, who lives in Detroit, posted a brutally honest review of his latest restaurant experience. The catch? The restaurant was his 18-month-old daughter’s play kitchen called Ava’s Restaurant. The Instagram photo captured Ava preparing food in her play kitchen while Kyle sat in a tiny chair at a tiny table. In his review, Kyle mentions the chef left in the middle of cooking for 20 minutes to go watch “Paw Patrol” and that he had been waiting over 45 minutes for his food, even though he’s the only customer. The May 21 post has since gone viral, making thousands of people smile while also promoting the importance of black-owned businesses. Kyle thanks God for spreading his message and bringing him and his daughter many blessings in life so far. Read more. 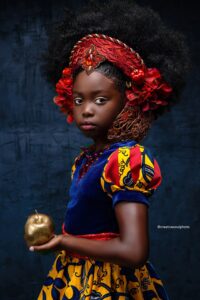 An Inclusive Take on Disney Classics

Many little kids love to play princess. However, many children don’t have princesses who look like them. Many years after the first Disney Princess, there is still only one Black princess: Tiana. Two Atlanta photographers: Kahran and Regis Bethencourt, decided to take matters into their own hands. With the help of some local vendors, the couple reimagined what classic Disney princesses would look like as young Black girls. The results are incredible. Read more.

Five hundred years after it was first constructed, a group of archaeologists believe that they have found the Elizabethan playhouse known as the Red Lion. While archaeologists are still working to confirm that the structure is, in fact, the Red Lion, the dig director was quoted as being “97% sure” that this was the famed theater they were searching for. The Red Lion is pivotal in the history of theater, because it marks a shift by being one of the first, if not the first, dedicated performance space for shows of its kind. After constructing The Red Lion, the theater’s architect would go on to construct the spaces where William Shakespeare’s plays would be performed a mere 30 years later. Read more.

Chances are, you have numerous cardboard boxes laying around from all that online shopping during quarantine. Deciding to make good use of this waste, one dad built a cardboard box slide down his family’s staircase. However, this was no average slide. The long, epic chute even included a turn! In the video, his kids are having the time of their life shouting “it’s super fun” while sliding down on their fuzzy blankets. It’s almost like they are at a real playground! Watch here.