Be My Date to (Backyard) Prom? 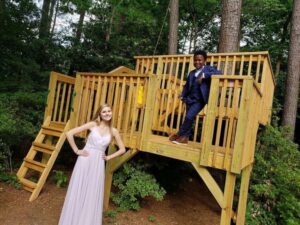 When 7-year-old Curtis heard that his babysitter’s senior prom was canceled, he decided to take things into his own hands…or his own backyard. With the help of his mom, Curtis surprised Rachel with a dinner and a dance. The menu included peanut butter and apples, Chick-fil-A, and smoothies. Curtis also made sure to include some of Rachel’s favorite songs to dance to, like Justin Timberlake’s “Can’t Stop This Feeling.” As if things couldn’t be more perfect, Curtis even donned a suit and bowtie that matched Rachel’s dress. Of course, all activities were done at a safe distance thanks to the help of a pool noodle and a 6-foot-long dinner table. It’s safe to say that Curtis should definitely win Prom King. Read more.

Thanks to the generosity of one couple, some Spelman College students get to achieve their dreams of college graduation, debt-free. Frank Baker and Laura Day Baker have donated more than $1 million to Spelman College, a historically black college for women, to help pay off the student debt of 50 graduates. According to Frank Baker, “We live in a world of have and have nots and people of color tend to be in the have nots and the biggest distinguishing factor is education.” Baker wanted to be part of the solution to this systemic inequality. As a father of three, he had his own daughter in mind when he made this donation. Thanks to Baker, these graduates now have the ability to go out and achieve greatness. Read more. 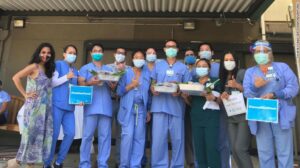 After a day of fishing in Hawaii, a group of five fishermen caught two yellowfin tuna weighing a total of 220 pounds. Rather than profiting off the big catch, these fishermen sought to feed their local health care workers. They sent the tuna to a local seafood distributor who then made 300 Poké bowls for Honolulu’s Straub Medical Center and The Queen’s Medical Center. They were inspired by a local fisherman, Setsuo Todoroki, who often caught fish and donated them to strangers. Since he recently passed away, they wanted to carry on his legacy. Read more.

A video from Walibi Holland, a Dutch theme park in the Netherlands is going viral for adorable reasons. Even though the park is currently shut down for quarantine, they had 22 unique riders take a ride on the RMC hybrid coaster. Those coaster cars were completely full with 22 oversized teddy bears. This video is a must-see as the huge fluffy but adventurous teddy bears soar through the park. Read more.

Pomp and Due to Circumstances 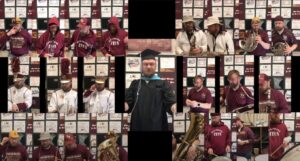 Since the graduation tune “Pomp and Circumstance” won’t be played in person at graduation ceremonies this year, one Minnesota music teacher decided to take things into his own hands. Because he had no students to play the instruments, Scott Kummrow performed a one-man-band version of “Pomp and Circumstance.” The video performance involved Scott recording 22 separate parts with many different instruments, including percussion, tuba, and trombone just to name a few. Talk about being dedicated to your students! Read more.