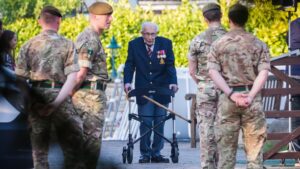 Captain Tom Moore, 99, has just completed what may be the most famous at home workout of all time. Captain Moore set a goal that he would walk back and forth across his garden 100 times before his 100th birthday on April 30. Word of this goal immediately spread internationally and quickly raised over $33,000,000 for those on the frontlines battling COVID-19. With the presence of a formation of soldiers from the 1st Battalion, Captain Moore completed his goal on April 16 — 14 days before his 100th birthday. Read more.

Although Shawn Johnson “never” lets her family watch videos of her as a gymnast, her family finally got the chance this past week. When the Olympics Channel asked Johnson to livetweet her 2008 performance, Johnson’s husband and daughter watched along with her. In an adorable video posted by Johnson’s husband Andrew East, you can see Johnson’s daughter, Drew, enthralled by the video of her mother. Follow Shawn Johnson and Andrew East for lots of adorable updates of baby Drew during quarantine. Read more.

Above and Beyond: Teacher Helps a Student Learn Through a Screen Door 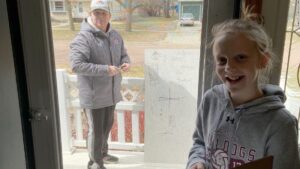 Like many students now, 12-year-old Rylee Anderson has had to start doing school work from home. But when she was struggling with one math lesson in particular, she emailed her teacher for help. Expecting an email back, you can imagine her surprise when she received a knock on the door instead. Her teacher, Mr. Chirs Waba, saw Rylee’s email and wanted to help in person. Luckily for Rylee, her teacher lived across the street. Waba brought his white board over to her front porch and helped Rylee with her math problems. After only 10 minutes, and through a screen door, Rylee was up to speed on just what to do for her lesson plan. It goes to show that not even a pandemic can stop the love and support teachers give to their students! Read more.

Benjamin Giroux, age 14, is gaining international fame for a poem he wrote when he was 10. His brilliant poem expresses what it is like to live with Asperger’s. At first, Giroux was worried that he would be laughed at for sharing his feelings, but instead, his poem has been translated into over 20 languages and has even been put to music. Now, his poem is about to be published as a book in the fall of 2021. Hopefully, Giroux’s poem will allow us to all celebrate our individual differences. Read more.

Virtual Sports: Making History and Honoring the Past 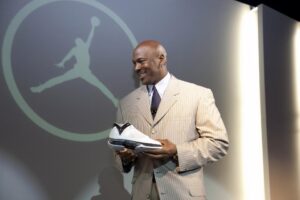 Missing your daily dose of sports fandom? While many sports fans are mourning the loss of getting to watch their favorite teams, there have been two highlights for NBA and WNBA fans alike. Last Friday, the WNBA draft was streamed on ESPN and was the most-watched WNBA draft in the past 16 years, and the second-most-watched draft in history. And even those who are not die-hard NBA fans have found enjoyment in watching ESPN’s new documentary, “The Last Dance,” a 10-part docuseries on Michael Jordan and the Chicago Bulls. There’s more good to come from this early release of “The Last Dance” than just some extra entertainment. Michael Jordan, who could earn between $3 million and $4 million, intends to donate that entire sum to charitable causes. Read more.