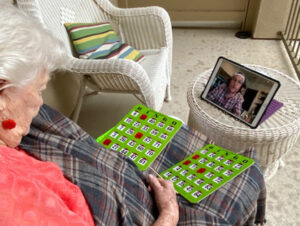 This past September, the residents at The Enclave Senior Living in Round Rock, Texas, posted a video on their social media inviting Matthew McConaughey to join them for bingo. Now, while in quarantine, McConaughey was finally able to accept. McConaughey, his wife Camila, and his mom hosted a digital bingo for the residents. McConaughey called out the letters for the dozens of seniors playing the virtual game. As a prize, each bingo winner got to ask McConaughey a question. Read more.

Who Run the World?

A group of girls between the ages of 14 and 17 worked together to solve an international problem. Together, these girls, who call themselves Team Cantavits, created an app that will help promote eco-friendly disposal of electronic waste, like phones, computers, and TVs. These girls cited that when e-waste is “disposed of as regular trash” it causes “all types of environment pollution and great health hazards.” Their app provides a conduit for communication between e-waste producers and authorized recyclers. Hopefully, thanks to the brilliance of these young women, we will see a global decrease in the amount of incorrectly disposed of e-waste! Read more. 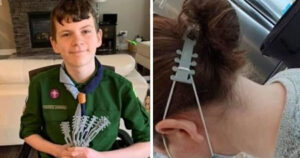 Quinn Callander, a 12-year-old Boy Scout from Vancouver, Canada, recently answered a call for help from his local hospital. The healthcare workers at a hospital nearby were complaining of significant ear pain after hours of wearing masks on their long shifts. Immediately, Callander knew how he could help. He sat down at his 3D printer and got to work. Callander designed a thick plastic strap that wraps around the back of the head and has notches for the healthcare workers to create their own desired tension to keep their mask in place. In addition to designing and printing a number of these straps for his local hospital, Callander has uploaded his design to an online 3D printing community so that others can print these straps at home as well. Read more.

Coffee King: Barista Uses Home as a Drive Through for Essential Workers

Now more than ever, employees deemed as essential have been relying on coffee to get through their long and tiring shifts. Like many states throughout the country, Californian businesses such as cafes and restaurants have had to shut down. Aspiring barista Ben Ramizerz noticed this need for coffee, and he did something about it. With his abundance of brewing supplies, he opened a window of his house, and started brewing coffee for free. Hospital staff, postal employees, and other essential workers now make a stop at Ramizerz’s window, grabbing a delicious coffee drink before work. Read more. 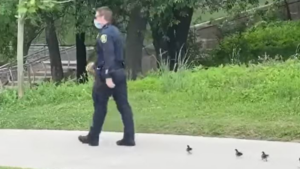 When a Houston, Texas woman named Priscilla Thompson locked her keys in her car while at a park, Officer Engelhart was called to come help. Officer Engelhart helped Thompson get back into her car but then had to quickly attend to another pressing matter… escorting seven adorable lost ducklings back to their mother. Thompson filmed the heartwarming scene, and it soon went viral on twitter. The video shows the ducklings following closely behind Officer Engelhart in a line. The Houston Police Department also posted a video that shows the lost ducklings safely back in the water. In the video, an officer can be heard saying, “I can see the mama duck right there.” Read more.