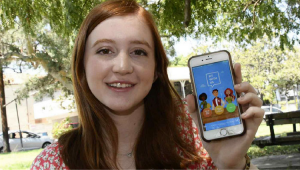 Sixteen-year-old Natalie Hampton knows what it feels like to sit alone at lunch, so she decided to create an app to help others avoid the same situation. The “Sit With Us” app is simple — students can sign up to be an “ambassador” to let other students know they can sit with them if they’re looking for an empty seat during lunch. This way, students can have the security of knowing that they’ll have a place to sit at lunch and avoid bullying or feelings of rejection. “People are already posting open lunches at my school,” Natalie said. “So I’m very excited that things are already kicking off with a great start.” Read more.

Merrill Powers has dedicated his life to serving others. He runs a Salvation Army Center in Chicago that has a drug-treatment facility, Meals on Wheels and community center, and Powers mentors many of those whom the center serves. Additionally, he has used his passion for grilling to help others. “What he realized is that it really made people happy to have barbecue,” his wife Nancy said. “You haven’t seen somebody’s face light up who yesterday was picking out of a trash can and today has pulled pork or brisket or barbecue chicken in their hand.” Last Thanksgiving Powers cooked 120 turkeys for the center and at a recent grilling party for the community, the TODAY Show surprised him with a visit from his favorite celebrity chef, Bobby Flay. Read more.

Bionic Woman and the Race of Her Life

When a horseback riding accident cost England native Clare Lomas the use of her legs, competing in a half marathon seemed like it was going to be impossible. But then she became the impossible. Using a robotic exoskeleton, Lomas, 36, completed the half marathon over the course of five days, covering about three miles a day. Lomas was “over the moon” when she completed the marathon but acknowledges that even miracles take hard work. “It takes some learning,” she said. “It’s not just physical work, it’s the concentration with every step.” Read more.

For most of us, having a birthday means making the day all about us. We want the spotlight on us because we have managed to make it another year. But Jackson, Mississippi, native Yasmine Glover had another idea when it came to celebrating her birthday. Yasmine started the We ACT movement, which stands for “When Everyone Acts, Change Transpires.” Instead of being showered with gifts, Yasmine decided to return the favor by throwing a party for the homeless and feeding them in the process. Read more.

When LaRon Tunstill was giving food to the homeless with a non-profit called PurpMe in Louisville, Kentucky, he started talking to a man on the sidewalk with beat-up shoes. He noticed that the man’s shoes were in such poor shape that his toes actually touched the ground. Right then and there, Tunstill took off his new Nike Air Jordans and gave them to the man. Coming from a rough area in Louisville, LaRon empathized with the man’s tough situation, but knew what he had to do, as he said, “because that’s what God wanted me to do.” Read me.